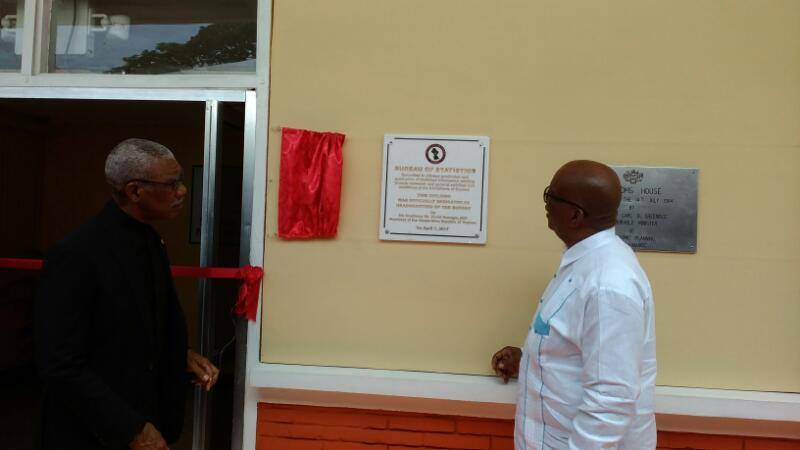 Relocated from Kingston, to the former Customs House Building on Main Street—now rehabilitated at the tune of GYD$160M—the Bureau of Statistics has been called on to evolve from an institution that merely generates information but in fact provides that information in a more readily accessible manner to the citizenry, in addition to foreign investors and other interests.

Head of State, President David Granger delivered the charge today (April 7, 2017), as he addressed employees and other special invitees, including members of the diplomatic corps, for the modest commissioning ceremony.
The President was also joined by Minister of Finance Winston Jordan, Chief Statistician, Lennox Benjamin and Bureau of Statistics Chair Natasha Gaskin-Peters, in ushering in the permanent home for the first time in its history.

Delivering the keynote address to the scores of employees (past and present) gathered for the occasion, the President was keen that it is the information generated by the ‘Stats’  Bureau that will guide and policy decisions of the administration and its people saying “good governance requires good statistics.”

The President in speaking to the importance with which the administration places on accurate data and statistics, joked that the decision to have the ‘stats bureau’ housed in a permanent location at Customs House on Main Street had in fact been taken before the election in May 2015, “truth be told.”

The formal decision was among the first during its first month in Office, at the level of the Cabinet Council of Ministers, by the coalition A Partnership for National Unity, Alliance for Change (APNU/AFC) government.

Emotive Influences
Granger said it is reliable statistics which will allow a citizenry to gauge the success or failures of government and to hold government accountable.

According to the President, the data generated by the Bureau of Statistics into the economic and social realities of the country serves as the basis for informed decisions and “remove anecdotal and emotive influences from the decision making process.” 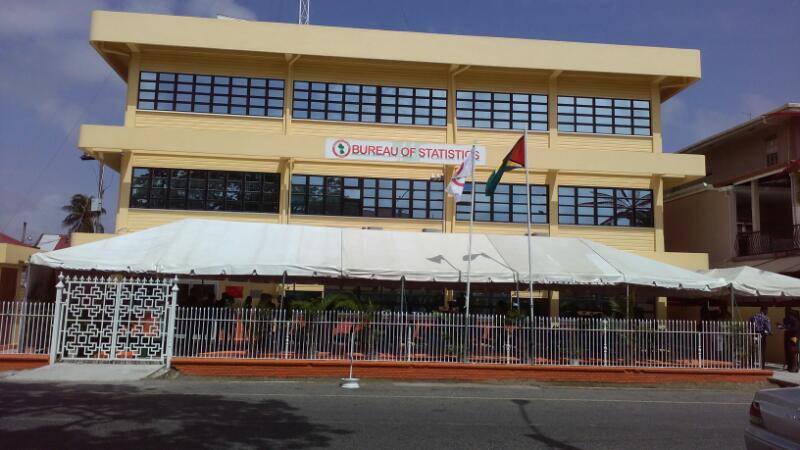 The permanent home of the Guyana National Bureau of Statistics, Main Street, Georgetown.

As such, the President rolled out a three-pronged approach on the part of government and spoke to institutional strengthening, a focus on infrastructure as evident in the new facility—to also be complemented by state of the art data processing tools—and the better provision of information services on the part of Bureau of Statistics .
Granger was adamant “The bureau of statistics must become a provider and not just a generator of information services.”

He has since challenged the entity to become a supplier of accurate and timely data gathered from across the country, making it available to its citizenry, the diaspora, government, international organizations, investors, the private sector and students. “Data must be generated which will allow public service managers to assess the performance of their agencies, staff and the services provided,” according to the President, who argued that in the absence of empirical data, policies can be placed at risk of being misaligned or misplaced altogether.

Permanent Home
Finance Minister Jordan used the occasion to remark, “at last finally after years of being shunted around like a second cousin the Bureau has been given a permanent home.”

The Finance Minister who also delivered brief remarks to the gathering, echoed the sentiments of the president as it relates to ensuring that data remains at the heart of the policy decision making of the administration.
The Minister—under whose portfolio Bureau of Statistics  fall—affirmed that statistics is a key input of macro-economic policy making and “underline the projections for the future development.”

According to Jordan, the quality, impartiality and timeliness of the information generated and supplied by GNBS is crucial to the successful functioning of any country and its economy, more so in a globalised world.
He recalled that the Customs House Building was in fact saved from a ‘fire-sale’ by the previous administration which had placed it on the ‘chopping block.’

According to Jordan, he would have also had to fend off intense competition at the level of Cabinet in order to convince some of his colleagues, as to the merits of housing the Bureau of Statistics  in the old Customs House building.

Recognized at the occasion as having served the Public Service for 50 years now, Chief Statistician Benjamin expressed his jubilation at seeing the Bureau of Statistics  finally with a permanent home given its several relocations over the years. He re-called the entity prior to 1957, operated as a dispersed statistical system before being consolidated into a central entity that was not without its institutional problems.
Having shifted from several ministerial portfolio’s over the years, from the Ministries of Finance, Trade, Economic Development and Planning, Bureau of Statistics currently falls under the purview of the Ministry of Finance and was statutised by the Statistics Act.

Following the formal remarks and pleasantries where several former and long standing staffers were honoured by the institution, the President unveiled his ‘plaque’ adorning the entrance of the building and after a brief ribbon cutting, was afforded a tour of the facility.

2017-04-07
Writer
Previous: Govt unlikely to take any action on VAT on education this year- Nagamootoo
Next: CLICO’s Duprey asks for evidence of debts owed in Guyana …now set sights on local housing sector