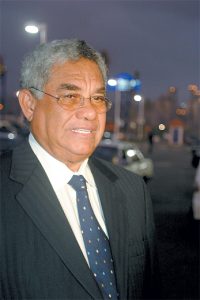 Majority shareholder and principal owner of Colonial Life Insurance Company (CLICO), Lawrence Duprey has set his sights on billion dollar local housing market and has asked for evidence to back of the claims of debts owed in Guyana—a request that the Central Bank is currently responding to.

Finance Minister Winston Jordan confirmed this today (April 7, 2017) when he spoke with reporters following the commissioning of the new GNBS headquarters on Main Street.

Minister Jordan was at the time responding to questions on Duprey’s recent overtures on re-entering the Guyana market and whether government was open to doing business again CLICO.

The Regional Insurance Giant in 2009 was ordered liquidated which left thousands of policy holders and investors in limbo as to their investments and financial interests—some still to be repaid billions.The Finance Minister told reporters, he met with the CLICO Chief Executive Officer, while in transit at the Piarco International Airport Thursday and that the two did talk briefly about his overtures and accelerating the process.

According to the Finance Minister, “he (Duprey) said, he is particularly interested in housing, because he is aware that we are into a housing drive.”

Minister Jordan was quick to dismiss any deals already in the making with Duprey’s CLICO saying, “the guy made some overtures to us…he is willing to repay the money, he is willing of course to apologize.”

According to Jordan, the CLICO majority shareholder has since requested of the administration evidence in relation to the CLICO debts locally.

The Minister said, during his brief talks with Duprey in Trinidad yesterday he was informed that CLICO has already been in touch with the Bank of Guyana “and I understand that Bank of Guyana is assembling the information that is required.”

The Finance Minister pointed out that there will in fact need to be some assessment done, since the State had intervened and sold off some of CLICO (Guyana) assets to pay off policy holders, “so we have to have an understanding of what is the outstanding figures and so forth.”

Jordan used the occasion to also dismiss as false a recent contention by Opposition Leader Bharrat Jagdeo that there was in excess of US$30M sitting in a bank account derived from the sale of CLICO assets but not handed over.
Jordan dismisses this as false promising to issue a more detailed statement at a later time.

Assassination Attempt
More than 2000 small policy holders had to be paid off when the courts ordered CLICO (Guyana) liquidated in 2009.

Then Commissioner of Insurance, Maria van-Beek was also shot to her chest but survived, during an apparent assassination attempt in the fallout and investigations that were launched by her office.
She immediately resigned and fled the country.

Government subsequently intervened and the Bank of Guyana sold off several of CLICO properties to pay off policy holders while larger interests such as the National Insurance Scheme (NIS) were left billions in the hole.
According to Minister Jordan, Duprey has at this point in time made overture to pay off the debts owed but has asked for evidence of this. As it relates to any proposal by Duprey, the Finance Minister said “we will be able to say yea or nay when we see what is on the table.”

According to Minister Jordan, “Guyana has always said it is open to business, it doesn’t mean we are open for business with rogues.” The Minister said as long as everyone can be forgiven and more importantly repaid, “we are open to any suggestions for investments.”

He did caution however, “his time around unlike the past administration, the investment will go through better scrutiny.”

Expanding on Duprey’s expressed interest in the local housing sector, Minister Jordan said unlike the previous administration the coalition government was looking to build greater emphasis on local content.
“I told him the last housing drive was devoid of anything of significance when it came to local content and I said in the previous housing drive in the 70s we had a lot of local content, we had clay-bricks, we had used our local wood for a lot of the doors on the houses and so on…”

According to Jordan the clay-brick concept had excited Duprey, since the technology is in use in neighbouring Trinidad and Tobago where CLICO is headquartered.

Asked about any time-frames with regard doing business with CLICO again in Guyana Minister Jordan joked, “the time-frame depends on when ah get mah money back.”

Opposition Leader Bharrat Jagdeo—under whose presidency CLICO tanked—earlier in the week said CLICO should be made to repay what is owed in Guyana before doing any business.

According to Jagdeo, “we always welcome investors into this country but we can’t deal with the CLICO matter anecdotally.”