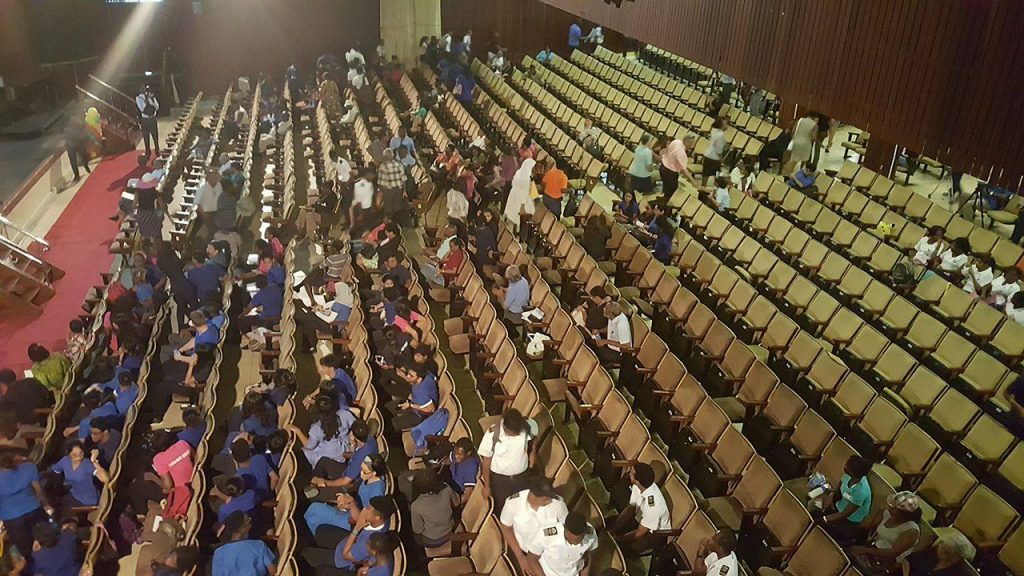 Attendees walking out of the meeting almost immediately after Prime Minister Moses Nagamootoo announced that the removal of VAT on education was unlikely until next year.

Prime Minister Moses Nagamootoo indicated Friday afternoon that government was unlikely to roll back the 14 percent Value Added Tax (VAT) on private schools this year, but held out hope that action would be taken in 2018.

“The 14 percent VAT will be reviewed. I say this- the 14 percent tax will be reviewed- as well as other taxes but whether it can be reviewed for 2017, I cannot say that definitively. I can tell you, for sure, I can say for sure that 2018 is a possibility so I can take your recommendation to Cabinet and hope that Cabinet can pronounce on your representation and that a decision should be announced soon,” he said

In the midst of his announcement, the attendees were in an uproar and even stated aloud “make no sense.”

After Nagamootoo’s announcement towards the end of  more than two-hour long meeting, many attendees immediately got up and began walking out of the meeting between government ministers, owners of private schools, parents and some students that was held at the National Cultural Centre.

Before Nagamootoo’s statement, Minister of Education Dr. Rupert Roopnaraine said figures show that the private schools “can absorb the VAT without passing it on the students.”

The Prime Minister’s position did not go down well with Principal of School of The Nations, Brian O’Toole who questioned whether that was Nagamootoo’s personal view or that of the government in response to the “extremely well put forward arguments” by those who called for the VAT on education to be scrapped. “I didn’t quite understand the Prime Minister’s rebuttal. Is he speaking on his own behalf; is that a decision; is that a thought? If it’s a decision that nothing will happen until 2018 a lot of people are going to e very, very disappointed and if that decision was made before this meeting, what were we doing here,” O’Toole told  Demerara Waves Online News.

The School of The Nations Principal said if the matter is taken to Cabinet and government does not revoke it, the protest would continue and more time would be wasted. A petition of 15,000 signatories has been already dispatched to government, urging that the VAT on education be abolished.

The Prime Minister and the Minister of Education, Dr. Rupert Roopnaraine both promised categorically that the concerns of the attendees would be taken back to Cabinet. “We heard all the arguments and we will take you case to Cabinet and ask for an open-minded review of this measure,” he said.

Nagamootoo said government has to impose taxes to help finance the provision of security, health and education as well as prop up the ailing Guyana Sugar Corporation (Guysuco) for which only a few days ago GYD$1 billion was approved by cabinet to pay workers’ wages and salaries. “The picture that is available to you today should be one that in order to maintain the level of services in Guyana, we need to ensure that they are taxation measures,” the Prime Minister said.

Government hopes to earn GYD$350 million from the VAT on private education this year.

Dr. Rudy Guyan of COLACCO, a school associated with the African Cultural and Development Association (ACDA), said  he left the meeting disappointed that government did not outline a plan to improve the quality of public education in an effort to dilute the perception that private education is better.  Guyan also criticized the Prime Minister for not leaving the attendees hanging on whether the VAT will be removed from private schools this year. “It was not sufficient to hear the Prime Minister leave us in a kind of vacuum on that. I would have liked to see a moratorium. Stop the VAT immediately until all we call concerned to talk about this whole issue,” he told Demerara Waves Online News.

The Prime Minister and Minister of Public Telecommunications went to lengths to explain the absence of Finance Minister, Winston Jordan from the meeting- he returned to Guyana from Panama on Friday and also had been meeting with a team from India’s EXIMBank.

With many of the private schools charging between GYD$144,000 and GYD$300,000 per academic year- raking in a total of GYD$2 billion annually, but not paying their fair share of taxes either by inflating expenditure and under-declaration of income; a number of private school owners called on government to go after the tax cheats instead of taxing everyone.

“Teachers are in many instances treated as contract employees and employers are not deducting the appropriate PAYE (Pay As You Earn) and NIS for these employees,” he said. Roopnaraine reminded that owners of private educational institutions cannot charge VAT unless the schools are registered for that tax if they earn GYD$15 million or more annually.

Several persons raised questions about whether the government-owned schools could absorb the large number of  students who currently attend private institutions and provide them with the same high quality of education and access to teaching-learning resources.

On the the Education Minister’s observation that many private schools charge more than the University of Guyana, Stacey French of Mae’s Schools said government provides financial support to that tertiary institution. “I would like to remind everyone that UG is subsidized by government…so we are think we are really comparing apples to oranges in that situation and I also believe that that is quite frankly irrelevant to the discussion,” said French.