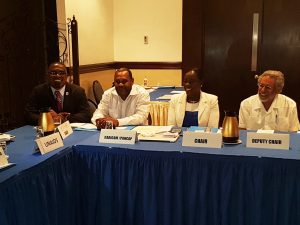 They were elected during the First Meeting of the Regional Coordinating Mechanism (RCM) which was convened on 4-6 April 2017 in Kingston, Jamaica.

The three-year grant, in the amount of US$5,075,234 began on 1 October 2016 and will end on 30 September 2019. PANCAP said the meeting received a Status Report on the implementation of the new PANCAP Global Fund grant which highlighted the programmatic achievements, financial disbursements and expenditures as at 31 March 2017 and provided strategic guidance to the Principal Recipient, CARICOM Secretariat, on how to achieve the goals of the grant.

“The grant aims to contribute to the removal of barriers that impede access to HIV and sexual and reproductive health services for key populations, thereby promoting the achievement of regional HIV targets,” PANCAP said in a statement.

The regional body said in addition to the election of the new Chair and Vice Chair, the RCM conducted an orientation of members on governance, oversight functions, management of conflicts of interest, and internal and external communication as well as a reviewing and endorsing of its oversight role and communications plan.

The Sub-recipient is the PANCAP Coordinating Unit, Sub-sub-recipients are the Caribbean Public Health Agency (CARPHA) and the Pan American Health Organization (PAHO), while the collaborating partners are the Caribbean Network of People Living with HIV and AIDS (CRN+) and The University of the West Indies – Health Economics Unit (UWI-HEU).

Henry expressed appreciation to the RCM for electing her and committed to an inclusive approach.  She invited members to contribute to the work of the body and thanked the former Vice-chair Professor Donald Simeon, for his excellent leadership and guidance during his tenure.

Minister Henry has over 20 years of experience providing technical guidance and support required for the planning, implementation, and strengthening of HIV public health programmes. She served as a Programme Development and Public Health Specialist (HIV Prevention) for the Centers for Disease Control and Prevention (CDC) Global AIDs Programme Guyana.

The new Vice Chair, Professor J. Peter Figueroa stated that it was an honour and privilege to serve in this capacity and committed to work with the Chair and all members to achieve the goals of the Global Fund grant. Dr. Figueroa is Professor of Public Health, Epidemiology and HIV and AIDS at The University of the West Indies, Mona Campus where he has developed a doctorate programme in public health. He was formerly the Chief Medical Officer at the Ministry of Health of Jamaica and for many years the Chief Epidemiologist and Director of the National HIV/STI Programme in Jamaica. He is also a Scientific Secretary of the Caribbean Health Research Council and the former Chair of the Priority Areas Coordinating Committee (PACC) and Vice Chair of the Executive Board of PANCAP.

2017-04-06
Denis Chabrol
Previous: Pakistan seeking to maintain winning ways ahead of first ODI against WI today at Providence -Ahmed expecting stiff challenge from hosts
Next: Govt unlikely to take any action on VAT on education this year- Nagamootoo