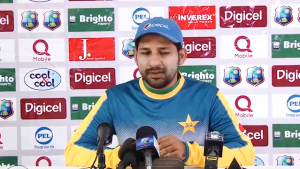 On the eve of the first of three One Day Internationals (ODI’s) between West Indies and Pakistan at the Guyana National Stadium, Providence; visiting skipper Sarfraz Ahmed said keeping the winning momentum would be crucial as they look to clinch another series win against the Caribbean side.

In a battle of the two lowly placed teams in ODI cricket, Ahmed, during Thursday’s press conference, believed that the confidence after a hard-earned 3-1 series win in the T20’s his team was more than ready to challenge the hosts in the 50 over format. “It is important that we continue the momentum and sustain the same kind of focus,” he said.

The wicket-keeper/batsman was seemingly confident that the make-up of his side would be useful on the new, untested track at Providence which should offer much to the seamers as well as being a natural slow-bowling haven for the spinners.

Meanwhile, West Indies captain Jason Holder said the team would be targeting not only  a series win but a win in the opening match which would immensely boost the team’s morale. While the Windies have not qualified for the Champions Trophy 2017, Holder believed the underdog tag would work well for his men who have a lot to prove in this series.

“Pakistan has been hard on us. They have beaten us in the last series we played in the UAE and they started this tour well. We’re probably the underdogs right now; it’s not a bad tag to have. The expectations are pretty much on Pakistan to beat us and that is an incentive for our guys. We must go and must show that we can beat Pakistan”.

He continued, “They are just a step ahead of us in the ICC rankings and I don’t think they are impossible to beat,” Holder said. Regarding

18 year-old leg-spinner Shadab Khan who befuddled the hosts in the T20’s, the Barbadian pacer said an increase from 20 to 50 overs would allow his batters to have a better look at their tormentor.

“He obviously had some success so far in this series, He is something new. Everybody is now getting accustom to seeing him but what I can say is that this one day format you have a bit more time than the T20, but having said that we have our game play against him”.

Pakistan are currently No. 8 in the ICC’s ODI rankings, holding the final automatic qualification spot for the 2019 World Cup while the West Indies linger in the 9th spot with five ranking points separating the sides.

In order to give themselves a fighting chance to qualify for the September cut-off time in terms of qualifying for the 2019 ICC Word Cup, they must beat the Pakistanis; thus, making the series an all-important one for them.