East and West Front Road squatters to be relocated 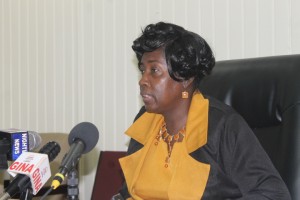 Persons squatting along the embankment of the East and West Front Road are earmarked for relocation.

Minister within the Ministry of Communities with responsibility for housing, Valerie Adams-Patterson, alluded to the planned relocation yesterday morning while addressing participants of the Central Housing and Planning Authority (CH&PA), National Planning Forum. The two-day forum was held at Regency Hotel, Hadfield Street, Georgetown

In her address to the forum, Minister Adams-Patterson noted that some squatters are asking for their present location to be regularized but this would have serious environmental implications and other issues. “If we do that then, we would be encouraging, (squatting). So, while we want to meet the needs of our people and we want it to be done in a peaceful manner, we also have a responsibility to ensure that it is done in a decent and orderly manner,” the minister was quoted as saying by the Government Information Agency (GINA).

Pointing to the situation along the East and West Front Road, the minister indicated that those persons would have to move. “When you look at areas like Sophia and East and West, we have to relocate those people that are living along those canals,” the minister explained,  adding that the relocation of the residents is crucial to moving forward the orderly development of those communities.

“Right now the Ministry of Public Infrastructure cannot go in there (East and West Front Road) to do any cleaning of those canals. There is no space not even for the equipment. Should we regularize, then we are culpable … I do not want to be a part of that,” the minister said.

The Government through the CH&PA has been working aggressively to either remove squatters or regularize areas that can be regularised.

These exercises are being carried out across the country and in communities including Sophia, Plantation Great Diamond, Angoy’s Avenue and will shortly move to the West and East Ruimveldt Front Road.

Recently, Minister Adams-Patterson and staff of the CH&PA held a meeting with the residents of Angoy’s Avenue, New Amsterdam in an attempt to regularise that unplanned area. The engagement resulted in the two-sides reaching consensus on the way forward on the issue that was unresolved for many years.

A plan was formulated which allows for residents occupying lands that are not reserved for roadways, drainage canals and community playgrounds, to pay for the land they occupy. It also covers the relocation of those residents living on the reserved areas in the community. Minister Adams-Patterson said that the CH&PA expects to regularise the area by the end of May.