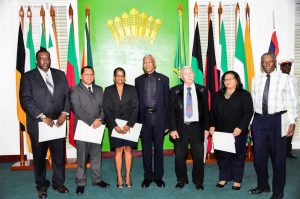 The National Toshaos Council (NTC) and President David Granger were Tuesday at odds  over  that Indigenous People’s organisation’s claim that it was never consulted about a Commission of Inquiry into land rights.

The NTC, the legally representative body of Amerindian village chiefs, said the Commission has been established by the President to “dispossess” Amerindians of their lands and that they would not cooperate with that body.

“The National Toshaos’ Council, a body comprising of all Toshaos of Guyana and a representative body of the Indigenous Peoples of Guyana, having never been consulted in the formation of such a body, cannot, with any degree of sanity nor confidence, respect such a body, and will refuse to cooperate with such a body,” the NTC said.

The Toshaos called on the President to repeal of the Commission of Inquiry into individual, joint or communal ownership of lands, along with Amerindian land titling issues and to instead stick to his promise in 2015 to establish a “Hinterland and Indigenous People Lands Commission”.  “We are forced to remind His Excellency of that commitment and to immediately seek for him to hold that commitment to the Indigenous Population of Guyana. We call on His Excellency for a complete repeal of the mandate of this Commission and to establish the Indigenous Peoples’ Lands Commission,” the NTC said.

The Toshaos warned that  Granger’s failure to keep his promise  would clearly demonstrate that Guyana’s Indigenous Peoples are being marginalized by the Government of Guyana once again.

The President did not say whether the NTC was among those that had been consulted.

“We received recommendations. I am not sure that that is an accurate statement. The proposal to establish a body was announced by me in August last year at the national toshao council meeting I think there had to be some consultation and persons who are on that commission are from a wide section of the community. There was consultation,” he told reporters.
Categorically condemning the “unilateral decision” to establish the Commission of Inquiry to address land issues, the NTC said it would not condone any attempt to take away their lands.

The governing body of Amerindian Village Chiefs expressed support for the urgent Reparations and the Repatriation of African lands but at the same time cautioned that “the Indigenous Lands issue cannot and should not be viewed in the same light, nor can it be addressed under the same framework.”

“The Indigenous Peoples, by Law, are entitled to their Traditional Lands, while the Africans are entitled to lands that were sold to their Ancestors. It is this very separation that needs to be clearly identified and defined. It is also in realizing that these two issues are separate issues that we must address them separately,” the NTC said.