Manufacturers warn of retrenchment, increased prices due to further devaluation of Guyana dollar 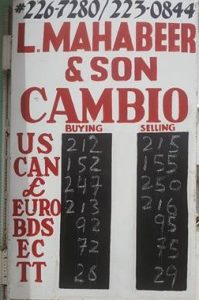 As the value of the Guyana dollar continues to deteriorate from GYD$215 to US$1.00 to as much as GYD$230 in the last few weeks, sources in the foreign exchange market said that is partly because authorities have been clamping down on gold smuggling and drugs trafficking.

The Guyana Manufacturing and Services Association (GMSA) on Wednesday warned of a rise in the cost of living and said businesses have already begun making staff changes.

“We are concerned that our ability to keep prices stable will be limited and guided by this new rate. The burden of the changes in the VAT (Value Added Tax) regime will also cause production costs to move upwards. The GMSA is encouraging all of the sectors to implement cost cutting exercises and have noted that some entities have started to rationalize employment,” the organisation said in a statement.

Sources said the banking system could not cope with increased demand for US dollars to pay for goods and services. The sources said up to recently the underground economy had had been awash with American dollars due to frequent gold smuggling to Suriname alone averaging at US$5,000 per day. Drug traffickers also used persons in North America and Europe to purchase supplies with dirty money and send back home goods for sale.

With the Anti-Money Laundering and Countering Financing of Terrorism (AML/CFT) law being enforced, the sources said the movement of proceeds of crime across borders is getting increasingly difficult.

Opposition Leader, Bharrat Jagdeo has, however, pointed to trends in a slump in foreign exchange from Guyana’s major exports, except for gold whose sales have raked in US$469 million in 2014 to US$778 million in 2016. “The market is not clearing so while there is a posted rate, most of the transactions are done at the 230 range,” he said.

“So you will see on the current account as well as the capital account of our balance of payments, the supply of foreign currency to our market has dropped significantly almost in every category that I have mentioned,” he said.

While the Bank of Guyana had recommended a GYD$3.00 spread between the buying and selling rates for US dollars (GYD$210- GYD$213), the actual over the counter rates at  Guyana Bank for Trade and Industry and Republic Bank (Guyana) Limited was Wednesday at GYD$207 – GYD$210.

In terms of online payments by Republic Bank debit card, the rate is GYD$230 to US$1.00 along with a fixed transaction fee of GYD$200 and any other transaction fees being charged by. The debit card exchange rate has depreciated from GYD$213 and GYD$217 in recent months.

Governor of the Bank of Guyana, Dr. Gobind Ganga told Demerara Waves Online News that he believed that the banks that are charging higher rates on debit and credit cards to protect themselves from any future foreign exchange rate movements. “One of the reasons would have been ‘hey we don’t know what is going to be happening in the future’ so they charge a rate that they know they won’t be making a loss so this is what is happening,” he said. Ganga said he was concerned about the GYD$230 to US$1.00 rate on Republic Bank online purchases because “this is sending a bad message.”  The Central Bank Governor said he  has not yet asked Republic Bank for an explanation.

At the non-bank cambios such as L. Mahabeer and Sookraj, the exchange rate published was GYD$212 to GYD$215. However, Demerara Waves Online News was told that non-bank cambios and unlicensed money changers do not turn back large amounts of foreign exchange sales in mainly large denominations such as US$50 and US$100 notes and would either buy or sell for as much as GYD$220.

When the Bank of Guyana Governor was told that businesses were not readily able to wire transfer or purchase foreign exchange drafts from commercial banks unless they joined a waiting list, Dr, Ganga said some businesses make “outrageous” demands for US$75,000 or even USD$500,000 or US$1 million. In such cases, he said their requests would have to be analysed and verified. “In terms of the wire, there will be a queue but we don’t have a long queue and we don’t have the time-span of a cue to be that long…like you know you can’t expect everyday you are going to get increased volume of exports coming in export earnings so that is what it is so with a little bit of patience when the banks get they sell,” he said.

The GMSA called on government to hold broad consultations on the foreign exchange situation and at the same to stave off retrenchment and a collapse of businesses by injecting funds into the system to satisfy supply and demand.

“This situation has the potential to further increase unemployment and at worst wipe out Companies,” the GMSA added.

That business organisation said the rise in the price of the American dollar “will have far reaching effects on our country as a whole both socially and economically.”

Back in early February, the Central Bank had told bank and non-bank cambios that the spread between the buying and selling rates should have been  between GYD$210 to GYD$213. The Bank of Guyana has also stopped by Trinidad and Tobago, and Barbados dollars because market intelligence had shown that persons from those countries had been selling their currencies here and buying large amounts of American dollars to take back to their homelands.