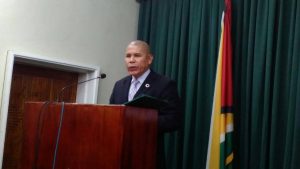 The Ministry of Social Cohesion will on March 23, 2017, launch ‘Harmony Village’ in the Main Street Avenue, to kick off a year of activities in pursuit of its mandate.

Social Cohesion Minister Dr George Norton, today (March 22, 2017) provided an update at the Ministry of the Presidency and said the activity will be hosted under the theme: ‘Beauty in Diversity, Celebrating Guyana.

According to Dr Norton, the activity will see an opening ceremony featuring a range of cultural renditions, music, spoken word, local cuisines and will see participation from the private sector, government ministries, cultural and religious organizations and the International Community including the Venezuelan and Chinese Embassies.
Featuring some 30 booths, Dr Norton said the Harmony Village is geared towards illustrating the inclusivity that is inherent in social cohesion and will creates an opportunity to showcase Guyana’s ethnic and cultural myriad and to celebrate Guyana’s beauty and diversity.

“When we look around we can see that diversity in each of us,” according to Dr Norton.

He said too that a section of Avenue will be transformed into a floating gallery meant to visually depict the cultural diversity.

Dr Norton told media operatives the floating gallery will essentially see the trees paving a section of the avenue, being emblazoned with images of persons from varying backgrounds and from across the country.
The floating gallery, according to Dr Norton, will remain on display for an extended period following the close of the village.

Expressing optimism and the hope that the activity will be well attended by patrons, Dr Norton sought to espouse the importance of “recognizing ourselves as one people….and will have a better appreciation for our diversity as a people.”

The Minister said it is not envisioned to be a fly by night activity and that this pilot project will be used as a platform to grow the event in future and touted its possibility as being included as a tourism calendar event for Guyana.