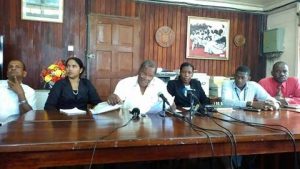 Five persons have been nominated to run against incumbent Patrick Yarde, for the presidency of the Guyana Public Service Union (GPSU) when its election is held on April 24, 2017.

GPSU’s first vice-president, Mortimer Livan made the disclosure today (March 22, 2017) when he led a delegation to face members of the media, to complain about recent reports against the union and signaled that it had urged Yarde—sitting in office for the past 30 years—to contest again for the post of GPSU President given his stewardship over the years.

Livan was unable to provide the names of the five nominated persons, since according to him, the tabulating and finalizing of the nomination process would not be completed until Friday (March 24, 2017).

The members of the GPSU, Executive Council were, however, in loud their praises of Yarde, and called those staging a picketing exercise this past week against the Union and its President, ‘misguided, disgruntled and nuisance.’

Livan and others who spoke, sought to testify in favour of Yarde’s tenacity in leading the union and that the picketing actions are being led primarily by two former disgruntled members who did not even have a right or say in GPSU’s affairs.

Livan told members of the media, “The main instigators of the so-called protest now taking place are Mr. Jermain Hermanstyne and Ms. Karen Vansluytman who have no Locus Standi in the affairs of the GPSU, are creating a distraction, a camouflage and a smokescreen…”

According to the GPSU vice-president, “this protest is being carried out by three groups of people, a few misguided and perhaps disgruntled members, those who refuse to pay the right amount of dues according to the rules of the union and non members.”

Livan disclosed that Hermanstyne—one of the protest leaders—was fired from employment and placed before the court for embezzlement—and he subsequently also lost his GPSU union status/membership.

According to Livan, while there are provisions for persons that would have lost their employment to maintain their membership, this was not done by Hermanstyne and that he did in fact leave the union voluntarily.
He said, the same also obtains with Vansluytman, are regarding GPSU’s membership since she no longer holds this status (GPSU member).

Responding to public claims by Vansluytman that her union dues were rejected and was instead asked to pay a fine, Livan called the pronouncement, “grossly dishonest since this matter was never addressed at the Executive Council.”
According to Livan, the rules provide clearly on how persons can be re-admitted into the union.

With regards Hermanstyne’s contention that he too was forced out of the GPSU, Livan told media operatives this is erroneous since voluntarily and out of embarrassment—a result of his legal troubles which had landed him court.
According to the First Vice President, GPSU’s rules dictate, “only persons who are fully paid up members with effect from the 1st May of the year prior to the election shall be eligible to exercise their ballot.”

With regards the protest action, Livan dismissed it as a masquerade, devoid of any legitimate basis, and was solely intended to embarrass the union in addressing general concerns through purported misleading statements, which were made and were carried in the print and electronic media.

On the matter of Yarde’s eligibility for re-election, Livan said GPSU rules permits him to contest for the office for as long as he lives, since the written protocols do not allow for an age limit for membership.
Yarde, he said has been nominated to be re-elected and as is represented by the five persons challenging him for the post, the GPSU employs a democratic system.

According to Livan, the protest actions instigated by Hermanstyne and Vansluytman are as a result of their unsupported ambitions in pursuit of elected office in the GPSU.

GPSU currently boasts a membership of some 5,000 public servants across its scores of branches countrywide.