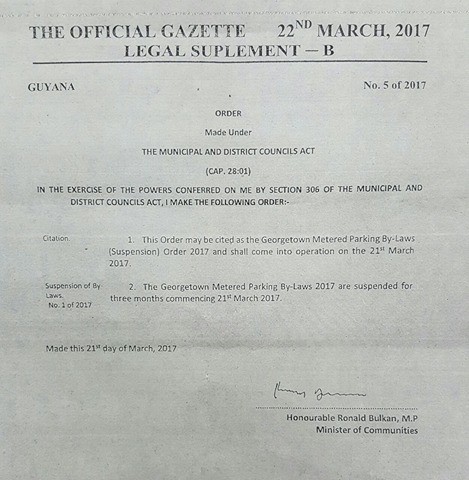 Minister of Communities, Ronald Bulkan’s latest order that suspends the Georgetown parking meter bylaws does not require City Hall’s approval, in contrast to the previous one that was issued one week ago.

The order issued on Tuesday states “the Georgetown Metered Parking By-laws 2017 are suspended for three months commencing 21st March, 2017.” Government wants the 90 days to be used to renegotiate the agreement between City Hall and Smart City Solutions with the aim of dealing with certain provisions including fees and areas where metered parking will be allowed.

The Minister’s latest order does not require Georgetown’s Mayor and City Councillors to suspend the by-laws and gives no reason.

In the first order issued on March 17, 2017, Bulkan had stated that the elected officials were “in default of their function.” “It is declared that the Mayor and Councillors of the City of Georgetown are in default of their function with respect to the Georgetown Metered Parking By-Law and I hereby direct the Mayor and Councillors to suspend the Georgetown Metered Parking By-Laws for three months commencing on the 17th March, 2017.”

When Councillors met on Monday, an A Partnership for National Unity (APNU)-aligned councillor, Heston Bostwick had sponsored a motion for Council to be given  time to study the legal opinion and report its findings to the Minister of Communities before deciding on the fate of the metered parking system in Georgetown. 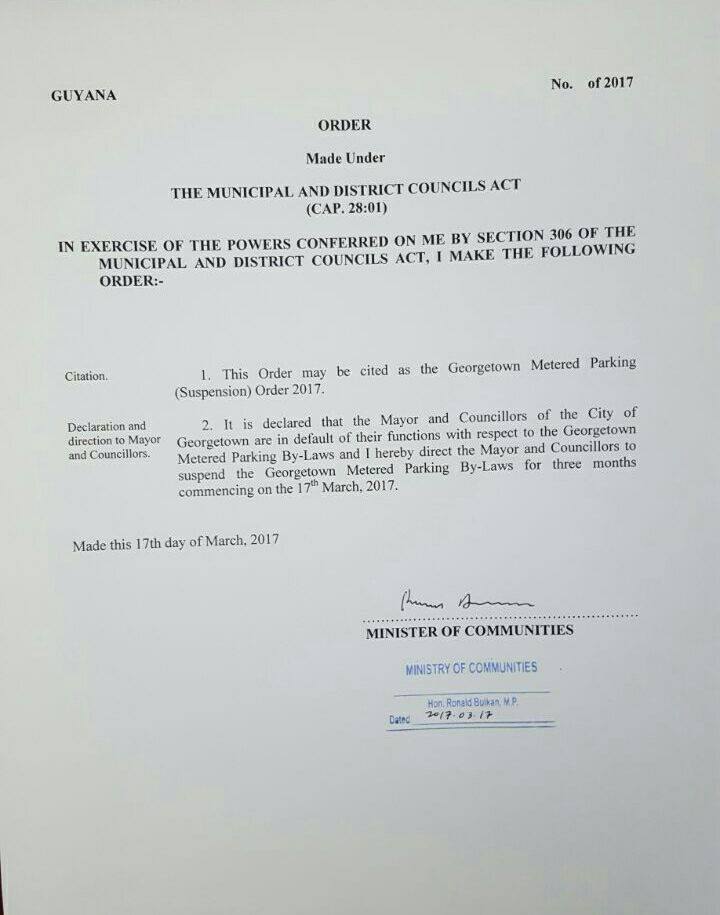 City Hall’s Attorney-at-Law, Roger Yearwood, frowning upon Bulkan’s previous reason that the Mayor and Councillors had been in default of their function, had stated in a legal opinion to the Town Clerk that the Minister of of Communities erred in interpreting the law he used to suspend the bylaw.

He said if the Council accedes to to that mandate, it would open up City Hall to a costly breach of contract in a Guyana court or also costly arbitration proceedings in the United States.
Town Clerk, Royston King on Monday told the Council that after communicating with the Minister, it had been decided that Cabinet’s recommendation for City Hall to suspend the contract would have been too risky financially and legally. They then agreed, he said, that the best route to take was the suspension of the parking meter bylaws.