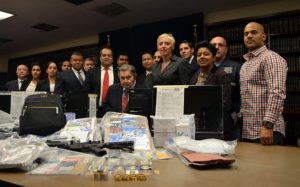 (TRIBUNE MEDIA)– As many as 16 Indian-origin people, including a woman, in the US have been charged for their alleged role in a massive stolen credit card and identity theft operation resulting in losses of over US$ 3.5 million to individuals, financial institutions and retail businesses.

Muhammad Rana, 40, of Queens in New York, was the leader of the massive fraud scheme who was helped by his deputy Inderjeet Singh (24).

In all 30 individuals have been charged as authorities cracked down on the extensive stolen credit card and identity theft ring.

The ring was allegedly responsible for stealing the personal credit information of hundreds of consumers and costing the individuals, financial institutions and retail businesses more than US$ 3.5 million in losses over the course of the alleged scheme.

Queens District Attorney Richard Brown said on Thursday many of the defendants charged are accused of going on shopping sprees, purchasing tens of thousands of dollars worth of high-end electronics and fashion merchandise with forged credit cards that contained the account information of unsuspecting consumers.

As part of their alleged scheme, the defendants ordered new credit cards for cardholders and stole them out of the cardholders’ mailboxes when they were delivered, Brown added.

Brown said 24 search warrants were executed earlier this week throughout Queens and Nassau Counties and numerous items recovered – including US$ 400,000 in cash, numerous gold coins and gold bars valued at about US$ 1,300 dollars each – binders with the personal information of hundreds of thousands of individuals, firearms, card readers and various amounts of raw material, such as blank credit cards and fake identifications.

Authorities said the defendants have been charged in a 389-count indictment accusing them of being members and associates of an organised criminal enterprise that operated in Queens and between April 2015 and January 2017, systematically schemed to defraud scores of unsuspecting consumers and financial institutions such as Citibank, Bank of America, Chase, American Express.

The investigation leading to the indictments and arrests began in April 2015 when police officers assigned to the Police Department’s Identity Theft Squad commenced the investigation into an identity theft ring.

The investigation involved physical surveillance, intelligence gathering and court-authorised electronic eavesdropping on dozens of different telephones in which thousands of conversations were intercepted, which required them to be translated from Hindi, Punjabi, Urdu and Spanish into English.

It is alleged that, in carrying out their scheme, the enterprise employed Ranvie Seepersad as a “profile supplier” who obtained the accounts to be compromised.

According to the indictments, after the criminal enterprise receiving the profiles, the information was provided to an “account activator,” who then compiled and organised the information, prepared the accounts to be taken over and, in some cases, actually took over the accounts by calling into banks and impersonating the true cardholders.

Rana provided accomplices in the crime with the stolen credit cards, along with the forged identification cards for them to shop. He directed them as to which electronics, high-end jewelry and gift cards to buy. —PTI