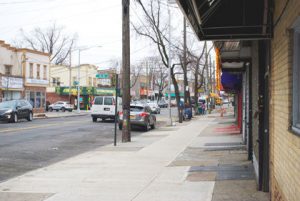 Dave Khan has seen better days at his barbershop.

Khan — the owner of Dave’s Barbershop and Hair Salon on Liberty Avenue for three years — estimates three-quarters of his customers are too afraid to leave their homes and get a haircut, fearful Immigration and Customs Enforcement agents will stop and deport them.

“Even the legal ones,” said Khan, a Guyanese immigrant in the country legally for eight years. “They tell me they don’t want to go outside … People are very scared right now.”

The decline in customers, he added, has meant a “tremendous” drop in business.

His shop last Thursday afternoon had two young children in the chairs, but he told a Chronicle reporter it’s often much busier than that around that time.

Khan’s not the only business owner on Liberty Avenue in Richmond Hill to feel the effects of false rumors of ICE raids that spread via word of mouth and social media.

On the avenue known as “Little Guyana,” many immigrants from the Indo-Caribbean nation have expressed fear of ICE coming to their home or stopping them in the street and sending them back to their native country.

“They’re afraid to go outside because they’re not sure if they’re going to get picked up for something like jaywalking,” said Vadesh Persaud, acting executive director of the Richmond Hill-based Indo Caribbean Alliance.

Neighborhoods like Richmond Hill and Ozone Park also have large groups of immigrants from Trinidad, Suriname and Barbados — immigrant groups that are also feeling the effects of both real arrests and false rumors.

Recently, many were led to believe Sybil’s Bakery — a neighborhood icon — and other eateries were the sites of enforcement by the federal agency due to a Facebook post that spread on the site.

A user by the name “OneofaKind HerbaSal” wrote “Anyone working on liberty ave jus [sic] got word they raid [sic] sybils n [sic] now they in singhs! They might b [sic] working their way down de [sic] ave …”

Ann Jeet, the manager of Sybil’s, said every other call now is from someone wondering if the rumors are true.

“It’s frustrating because we take a lot of orders over the phone,” Jeet said. “It’s very disruptive.”

Both Jeet and Khan said the fear has not extended to their employees.

“Everyone here has their papers,” the bakery manager said.

Jeet added that there hasn’t been a significant dip in business at Sybil’s, adding that the bakery is still very busy on weekends.

“This has resulted in less foot traffic and left many businesses empty,” the councilman said at the press conference. “It’s disrupting their quality of life.”

Wills said uniformed members of the Police, Fire, Sanitation and other departments have been mistaken for ICE agents.

“Even people from my own office,” he added.

There were also rumors of immigration enforcement in the area two weeks ago following a car crash on the Van Wyck Expressway that required FDNY and NYPD response.

Guyanese natives are the second-largest immigrant group in Queens, going by individual nation.

“That’s just the documented ones I think,” community activist Richard David, a Guyanese immigrant himself who is challenging Wills in the September Democratic primary, said in an interview last Friday.

David, and other people interviewed for this story, said there’s a large number unaccounted for because they’re undocumented.

According to a January report from city Comptroller Scott Stringer, Guyana natives are the fifth-largest immigrant group citywide.

Dhan Paul Narine, who teaches an adult education class at Richmond Hill High School, said five of his 25 students are fearful to come to class.

“They don’t know what’s going to happen,” Narine said. “We don’t want to live in a community of fear.”

The educator speculated many did not show up to Wills’ press conference because of the fear they feel.

“They’re afraid they’re going to get picked up,” he said.

But the fear is not contained just in Little Guyana.

At the start of the Trump administration, educators could sense “there was some absenteeism,” the congresswoman said in an interview last Saturday.

“The fear is there,” she said.

As Khan said and others repeated, even those here legally question whether they should leave their homes.

Responding to a question from the barbershop owner at the press conference, Wills said he’s willing to work with businesses and places of worship to promote accurate information about immigration detentions in Queens.

But even that might not work to calm some people.

“The fear kind of overrides any of that,” said Persaud. “It’s a very real fear for them. Maybe we can tell them ‘Well this is true but it didn’t happen here,’ but the fear really does override any of that.”

Still, David said the most effective way of fighting false rumors of ICE raids and fears of deportation is to meet face-to-face with concerned residents — something he pledges to continue on the campaign trail.

“If we approach this issue as a personal issue, people will begin to develop trust,” he said. “They’ll be more willing to continue their everyday activity.”

Wills highlighted the importance of everyone knowing their rights, especially those of legal status who have nothing to worry about.

“We are not going to accept them being fearful of going outside,” the councilman said.

While ICE has arrested some immigrants and residents with green cards across the country in recent weeks, there have been no mass raids in the city or anywhere else in the country. A 23-year-old rapist from Guyana and 57-year-old Trinidadian native convicted of DUI were among those in Queens to be detained.

There have been no complaints regarding the legitimacy of those arrests, Wills said.

“That leads us to believe they were all true,” he said.

At least one person at the press conference was familiar with dealing with federal immigration officials.

Guyanese immigrant Ramesh Palaniandi was detained by ICE in 2015 — eight years after he served time in a U.S. prison for burglary — and not released for a year and a half.

The agency threatened to deport him back to his country of origin.

“At first it was very scary,” Palaniandi, who is in the country on a green card, said in an interview. “I didn’t know what was going to happen.”

His wife, Janice Hoseine, fought for his release by reaching out to advocacy groups who ultimately got him free last year. He is still monitored by ICE via an ankle bracelet, which he showed to a Chronicle reporter.

Hoseine said Queens has become more mobilized to help those in need since her husband’s detention.

“When my husband was arrested, I had to go outside of Queens for help,” she said at the press conference. “Now, I’m so happy to see all this support.”

While ICE action in Ozone Park and Richmond Hill is nothing new, there’s a heightened sense of concern with President Trump in the Oval Office.

Persaud said some are so afraid they prefer face-to-face interaction with immigration advocates, so as to not provide an electronic trail of where they are or who they’re talking to.

“When I spoke with [then-President George W.] Bush, I was able to give my opinions and talk with him and I saw him as my president,” she said. “But with this guy … he needs to realize that his words have consequences.”

And it’s not just in Queens that people are feeling it.

Persaud said people in Guyana and other Indo-Caribbean countries are second guessing visits to the United States.

“They’re scared of actually coming to the States and getting caught up in all this whirlwind,” he said.