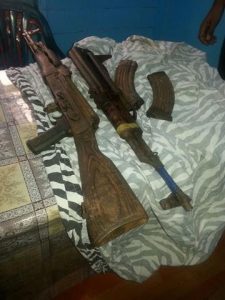 The assault rifles allegedly found at the home of a businessman at Meten-Meer-Zorg, West Coast Demerara.

Two assault rifles were Thursday afternoon seized from the home of a West Coast Demerara businessman, the Guyana Police Force said in a statement.

Investigators said they uncovered one AK-47 and one M-70 assault rifle fitted with empty magazines at the 36-year old man’s house at Meten-Meer-Zorg.

The firearms, they said, were in a bag hidden under a commercial gas stove

The businessman has been arrested and he is assisting police with their probe.

And across at Omai Landing, police said they arrested a 35-year old resident of Lake Mainstay, Essequibo River after one .45 Taurus pistol and six matching rounds.

“The suspect who is a machine operator, was observed acting in a suspicious manner and a search was conducted on his person which revealed the unlicensed weapon. He is being processed for court,” police said.

Police also reported that a resident of Mabaruma, North West District  found a .380 automatic pistol behind his yard about 3:30 Thursday afternoon and “promptly” handed it over to the law enforcement agency. Investigation in 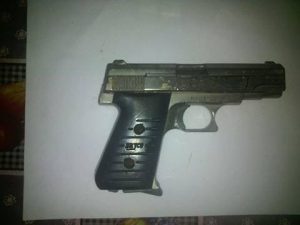 The gun found in a yard at Mabaruma, North West District

On March 3, at about 8:30 PM, police said they seized one .32 revolver and 10 live rounds in the possession of a  miner who resides at Safari Street, North Ruimveldt. 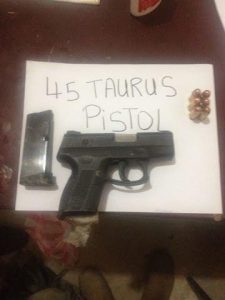 The handgun and ammunition allegedly found in possession of a man at Omai Landing.

Earlier this month, police said they went to the home of a 25-year old welder at ‘A’ Field, Sophia, East Coast Demerara on March 1, 2016 and found an unlicensed model 92 automatic 8mm pistol hidden in a pit latrine, in the yard.

The suspect admitted he owned the weapon.

Last year, police said 109 illegal firearms were taken off the streets  compared to 115 for 2015.

A break down for the two years shows that last year 49 pistols, 32 revolvers, 26 shotguns, two rifles and one sub-machine gun were seized. In 2015, police said they seized 60 pistols, 30 revolvers, 15 shotguns, eight rifles, and one pen gun