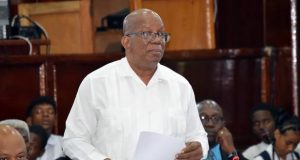 The National Assembly today (March 9, 2017) approved of a multi-million dollar pension package for Former Prime, Minister Hamilton Green (1985-1992), despite boisterous protestations on the part of the political opposition.

The Bill was successfully piloted by Finance Minister, Winston Jordan, on behalf of the coalition A Partnership for National Unity, Alliance for Change (APNU-AFC) Government.

APNU-AFC using its voting strength in the House approved the package for Green, rejecting an alternate proposal by the Peoples’ Progressive Party Civic (PPP/C), to instead pay the former Prime Minister, a one off ‘ex-gratia’ payment in order to correct the malaise which had obtained—a position argued by government speakers throughout the debate.

With the passage of the Bill, Green will now be paid a pension pegged at 7/8 of the salary of the current Prime Minister which stands at $1.7M, in addition to the benefits afforded to that of a former President.

The boisterous debate commenced shortly after the 14:00hrs start time of the scheduled sitting and wrapped up with an affirmative vote at 18:55hrs with one change—a change to the effective commencement date, for the revised pension to be paid from April 1, 2017 as against the originally proposed date of December 1, 2017.

Recognizing the ‘caustic and vitriolic’ furor that had been generated by Non Governmental Organizations (NGOs) such as Transparency International Guyana Inc (TIGI) and the Guyana Human Rights Association (GHRA), Finance Minister Jordan, in calling for the second reading and subsequent passage of Bill, urged members of the House to heed principle and not personality.

He was adamant there is no law that causes a person’s pension to be forfeited or denied if they are alleged to have, or accused of committing some wrong.

He told the House that the Constitution provides specifically for the two principal office holders of the land to be the President and Prime Minister and upon demitting office should be paid a pension reflecting the high office held.

According to Jordan, former Prime Minister Green has been denied his benefits, for 25 years—a situation that obtained based on the incorrect calculations of his pension.

The Finance Minister told the House that while Green was in receipt of a pension, it was reflective of that of an ordinary legislator as against that of a Prime Minister.

He said the erroneous calculation was compounded by deliberate acts over the years on the part of the then PPP/C administration, such as when it adjusted the pension package for former Presidents and deliberately omitted Green.

Jordan said too that despite holding the Office of Prime Minister, Green was never afforded the benefits that should accompany the package associated with retiring from that office.

According to Jordan, the PPP/C only made accommodations for former Presidents Samuel Hinds, Bharrat Jagdeo and Donald Ramotar.

Opposition Chief Whip, Gail Teixeira, in her presentation to the Bill was adamant that the Green Pension Bill was nothing more than more than a reward for the Peoples National Congress (PNC) stalwart.

Teixeira—who was at the time standing in for colleague parliamentarian Priya Manickchand—argued that if it was a case that Green’s pension had in fact been calculated erroneously over the years the PPP/C would support a ‘ex-gratia’ one off payment reflecting the correct calculations.

Lamenting the proposal on the part of Government, she also labored on the point that APNU-AFC was looking to give Green benefits equivalent of a former President—a position he has never held, and called in vain for government to withdraw its Bill. 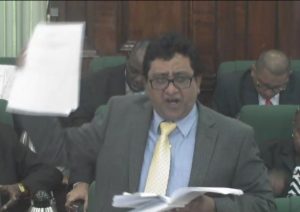 The People’s Progressive Party Civic’s Anil Nandlall waves a copy of the Hamilton Green pension bill as he holds a copy of Guyana’s Constitution.

Former Attorney General Anil Nandlall, was also among the PPP/C speakers to vociferously object to Hamilton Green Pension Bill, calling it discriminatory and a vulgar actor of political tokenism.

Expanding on his argument that the special Bill for Green was in fact discriminatory, the former Attorney General sought to make the point that a pension is calculated based on the salary that person earned but that the Bill to aid Hamilton Green seeks to pay him a pension that bears to relationship to his salary, “so it cannot be a pension.”

Nandlall pointed to the Guyana Constitution which nullifies any law that that is discriminatory and argues that if the law were to be passed then it would in fact discriminate against all public servants.

He suggested that the Bill abrogates the principal where a pension is calculated based on the salary earned by a person  and argued that Government would want to consider making such an application across the board to include all legislators and other such office holders.

Nandlall said the PPP does not object to the payment of a package to have a dignified existence but this must be done in an even handed manner.

Government Speakers however, did not appear to buy the opposition arguments and on numerous occasions called for the Bill to be considered on its principle and merit as against the personality of Hamilton Green. 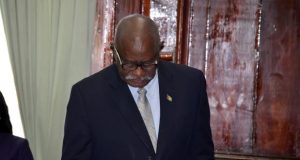 One such Speaker was Minister of Citizenship, Winston Felix, who sought to point to the universal principle in every civilized part of the world that the holders of the highest office and his number two are provided with a pension and certain benefits that allows that person to live in dignity and maintain the aura of that high office that they once held.”

Minister within the Ministry of Communities, Valerie Patterson, also appealed to the members of the House to focus on the principle associated with the Bill as against the personality.

She said Green was for 25 years denied his rightful pension and benefits.

Patterson maintained that the Bill seeks to the deficiencies which obtained and appealed to the House saying, “Whatever our politics may be, principle is principle, and if we are to develop as a nation such matters must transcend party politics.”

At least one opposition member was adamant Green should not be paid one cent extra.

PPP/C back-bencher Cornel Damon charged that Green must in fact “toe the line, he must not be given a cent more.”

He insisted that the Bill is in fact illegal, obnoxious and has no place in the National Assembly.

Damon urged government to stop wasting tax-payers money on persons such as Hamilton Green and instead focus on the youths of the nation.

He too argued that it was discriminatory for Green’s pension to be indexed to that of the current Prime Minister, saying that persons retiring during the time the former Prime Minister served should also have their pensions hedged in a similar fashion.

He questioned whether it was a case of the government repaying Green for some favour.

Government’s principal legal officer in the form of the Minister of Legal Affairs and Attorney General, Basil Williams, sought to impress on the House that the Prime Minister Hamilton Green Pension Bill was nothing more than correcting a historical wrong. 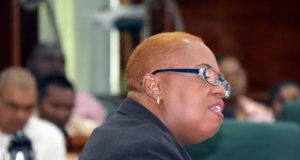 Speaking to queries made with regard why the name of the Bill reflected a specific person, Williams contended that this is nothing new since there is precedent in a number of previously approved pieces of legislation, including those that dealt with pensions for state employees.

He charged that the previous administration had provided amply for former presidents and deliberately excluded the lone living former Prime Minister—a repugnant act, according to Williams.

Former Prime Minister Samuel Hinds is paid a pension package paid to that of a former President since he did serve as President of Guyana for nine months following the death of Cheddi Jagan in 1997.

Williams told the House that it was the previous administration under the aegis of former President Bharrat Jagdeo, who sought to peg the payable pension to the salary of the sitting president.

He sought to elucidate the point that while Green’s pension was being pegged to salary of that of a current Prime Minister inclusive of benefits afforded to former presidents, it is taking into account his decades of yeoman service, including as a legislation.

“We have to move away from that kind of politics in this country, we can’t be so cruel to each other,” Williams implored, as he urged support on the part of the PPP/C. 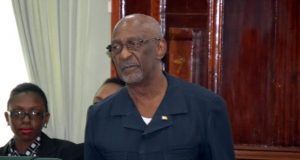 The Finance Minister in his postulations said the PPP/C could not defeat the Bill on its merit and as such attempted to defeat the proposal on personality.

Other speakers to the mini-marathon debate included Minister within the Ministry of Social Protection Keith Scott, who sought to present a character reference of former Prime Minister Green saying to further deny Green his pension is discriminatory and should not be encouraged in the House.

Trade unionist Gillian Burton-Persaud, another of the speakers opposition the Bill objected to the pension packaged being indexed to that of a sitting Prime Minister and argued that if this were to be pursued by Government then it should be applied across the board to include all public servants.