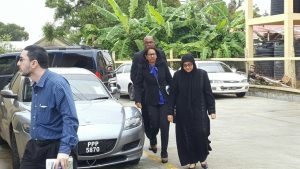 Director of Public Prosecutions,Shalimar Hack (second from left) arrives at Special Organised Crime Unit to be questioned about her acquisition of a house lot at Pradoville 2. She is accompanied by her husband, Moenul Hack, and their lawyer, Nigel Hughes.

Director of Public Prosecutions, Shalimar Hack and her husband, Moenul Hack, on Friday subjected themselves to questioning by agents of the Special Organised Crime Unit (SOCU).

They were questioned about the acqusition of a house lot at Pradoville 2- Ogle/ Sparendaam under the previous People’s Progressive Party.

Accompanying them was Attorney at Law, Nigel Hughes who said no allegation has been levelled against her and she was merely there to assist in a fact-finding mission. “The investigators made it very clear that the position of the Hacks is that they are assisting them in the fact-finding mission in relation to a lot they acquired at Pradoville,” he said.

Hughes declined to say whether or not the DPP was Friday asked by investigators  documents to provide any documents. He also refused to say what investigators asked his clients, saying he did not want to prejudice the investigations by SOCU.

The Director of Public Prosecutions has more than one month ago said she would recuse herself from the matter if any of the matters were to go to her Chambers for advice.

Still on the question of potential conflict of interest and whether the DPP should step down, Hughes reiterated that “I have made it pellucidly clear that they are not suspects, that they are not the target of any investigation.” He said he coukd not see why the DPP should step down “because there is no allegation, she is not the target of an investigation.”