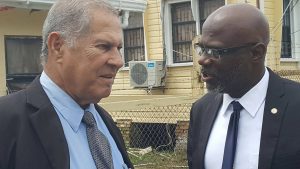 Former Chief-of-Staff of the Guyana Defence Force (GDF), Retired Rear Admiral Gary Best Friday afternoon said he had been informed by the then government that housing land had been available at Ogle-Sparendaam, and his lawyer does not believe that he should now pay more if authorities say the land has been undervalued.

“The Government of Guyana made that information available to me… not directly. It was indirectly that they have an area identified for additional government housing , like other areas, and that area was Sparendaam. I didn’t know it would now become the infamous Pradoville 2 but it was just Sparendaam at the time,” he told reporters when asked by Demerara Waves Online News.

Senior Counsel, Bernard De Santos was confident that his client would not be charged for any offence. “Charged for what? Being a good citizen,” said the former Attorney General under the People’s Progressive Party Civic administration from 1992 to 1997.

Best  explained that he was informed about the availability of the house lot at a meeting or during discussions in his capacity as Chief-of-Staff. “I would have applied for it after I learnt that,” he said. 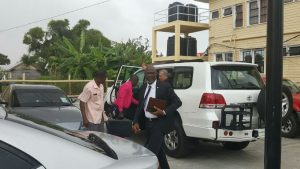 Former Chief-of-Staff of the Guyana Defence Force, Retired Rear Admiral Gary Best arrives at the Special Organised Crime Unit to be questioned by investigators about his acquisition of land at Pradoville2

The former Chief-of-Staff, who is currently a presidential advisor on the environment, said there are three layers of investigations – asset managers, decision-makers about the assets and those who purchased the house lots without any knowledge of who were or were not managing the assets. He said investigators of the Special Organised Crime Unit (SOCU) merely wanted to know how he became the owner of a house lot at Ogle-Sparendaam. “This is just an enquiry as to how I was able to purchase a house-lot that is connected to other things that they are investigating…I am at the bottom of the level whereby they wanted to know how I was able to acquire y house lot and I explained that to them,” he said.

The Retired Chief-of-Staff does not believe that government can now ask him to pay more than the GYD$1,502,000 that he had bought the land for if a valuation shows that it was worth more. He contended that after government develops housing lands across the country with water, roads and electricity and sets the price, market forces do not apply. “Once the government sets the price in my view, the government enters the market and sets a fixed price in the market so the question of market value becomes one that will have a lot, a lot of discussion- what is below, what is, what is above,” said Best, also an Attorney-at-Law. He noted that all previous governments of Guyana have always subsidized housing. Best argued that the issue of market value would have to be examined very carefully by taking into consideration the  original condition of the land sold and future development.

Asked whether Best would be willing to pay more for the land if authorities were to make such a demand, Attorney-at-Law De Santos said that would be a violation of  the contract. “Speaking for myself, the answer to that is negative because that was a free contract entered into by this gentleman, like any other contract. Why should he pay more because somebody decides that the land values more?,” said De Santos.

Former government  minister, Robert Persaud has publicly stated that he would be willing to settle the difference if authorities could justify that the land values more. However, former Attorney General, Anil Nandlall- who is representing former President Bharrat Jagdeo and other former Cabinet ministers- has told the privately-owned Stabroek News newspaper that they would not be doing so. Persaud and the opposition People’s Progressive Party (PPP) have had strained relations since that party lost the May 2015 general and regional elections.

Also questioned earlier Friday by SOCU investigators about how they acquired a house lot a Pradoville were the Director of Public Prosecutions, Shalimar Hack and her husband, Moeenul Hack as reported here http://demerarawaves.com/2017/03/10/dpp-husband-questioned-about-pradoville-houselot-but-arent-suspects-hughes/ Earlier this week, SOCU arrested Jagdeo and former Head of the Presidential Secretariat Dr. Roger Luncheon from the Opposition Leader’s Office where they were questioned and released without bail. Also questioned so far are others who were alloted Pradoville 2 houselots- Lisaveta Ramotar, Clement Rohee, and former Head of the Office of Climate Change, Andrew Bishop.

Former Prime Minister, Samuel Hinds; former Chief Executive Officer of the Guyana Water Incorporated, Shaikh Baksh, former Chairman of the National Communications Network (NCN), Dr. Nan Kishore Gopaul and former NCN Director Kwame Mc Coy were also grilled by SOCU investigators. The probe team is trying to ascertain whether NCN’s AM antenna mast and transmission station were removed from Sparendaam mainly because the mast was in the flight path of aircraft leaving the Ogle Airport or principally to vacate the lands for housing development on behalf of Jagdeo, former Cabinet officials and other government officials.