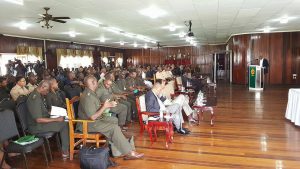 Commander-in-Chief of the Armed Forces, President David Granger on Thursday warned that  recent calls for street protests could have serious implications for national unity.

“Threats might arise, however, from elements who wish to undermine internal security. Reckless remarks about an uprising and provocative calls for the mobilisation of foot soldiers have the potential to rip apart the fragile fabric of social cohesion that we enjoy,” he told the opening of the GDF’s Annual Officers Conference.

He highlighted the GDF is legally mandated to defend and maintain order in Guyana and the discharge of  such other duties as may e defined by the Defence Board. “This implies that the force must constantly be in a state of readiness to deploy troops effectively and at short notice to conduct operations by day or by night, in any weather or terrain in any part of the country to meet any emergency,” said Granger, a retired Brigadier and former army Commander.

The opposition People’s Progressive Party (PPP) has in recent weeks been calling for street protests if government closes sugar estates of the state-run Guyana Sugar Corporation (Guysuco) or unilaterally appoints a Chairman of the Guyana Elections Commission (GECOM) outside the list of nominees submitted by Opposition Leader, Bharrat Jagdeo. Granger on Wednesday told Jagdeo the expected qualities of nominees for the post of GECOM Chairman, moving one step closer for the Opposition Leader to submit a second list.

The President credited the GDF in reducing threats such as domestic and transnational crimes such as piracy are being reduced due to “more robust surveillance by the Air Corps and the Coast Guard and joint Task Force.

He welcome an announcement by GDF Chief-of-Staff,  Brigadier Patrick West that the Reserve Force would once again be established on “equal footing with the regular force” in keeping with the Defence Act. “Given our limited financial and material resources and by force of circumstance, the Defence Doctrine must be based on maintaining a small regular force and a relatively large reserve force which can be deployed to all parts of the country to respond to emergencies,” he said.

“In this way, a small force in peace time could grow into a larger force during operations and, of course, during our major field tactical exercises,” he said.

The President said reserves in each of the 10 administrative regions would be closer in time and space to respond more promptly to emergencies such as an incursion, flood or other natural calamity.

Granger hopes that the reserve force is maintained at “sufficient strength” in the capital town of every administrative region and the technical capability of the Coast Guard as well Air, Artillery and Engineer Corps in addition to maintaining the efficiency of the ground troops.

The President said he is “very confident” that over the next three years friendly governments would assist the GDF in strengthening its technical arms.