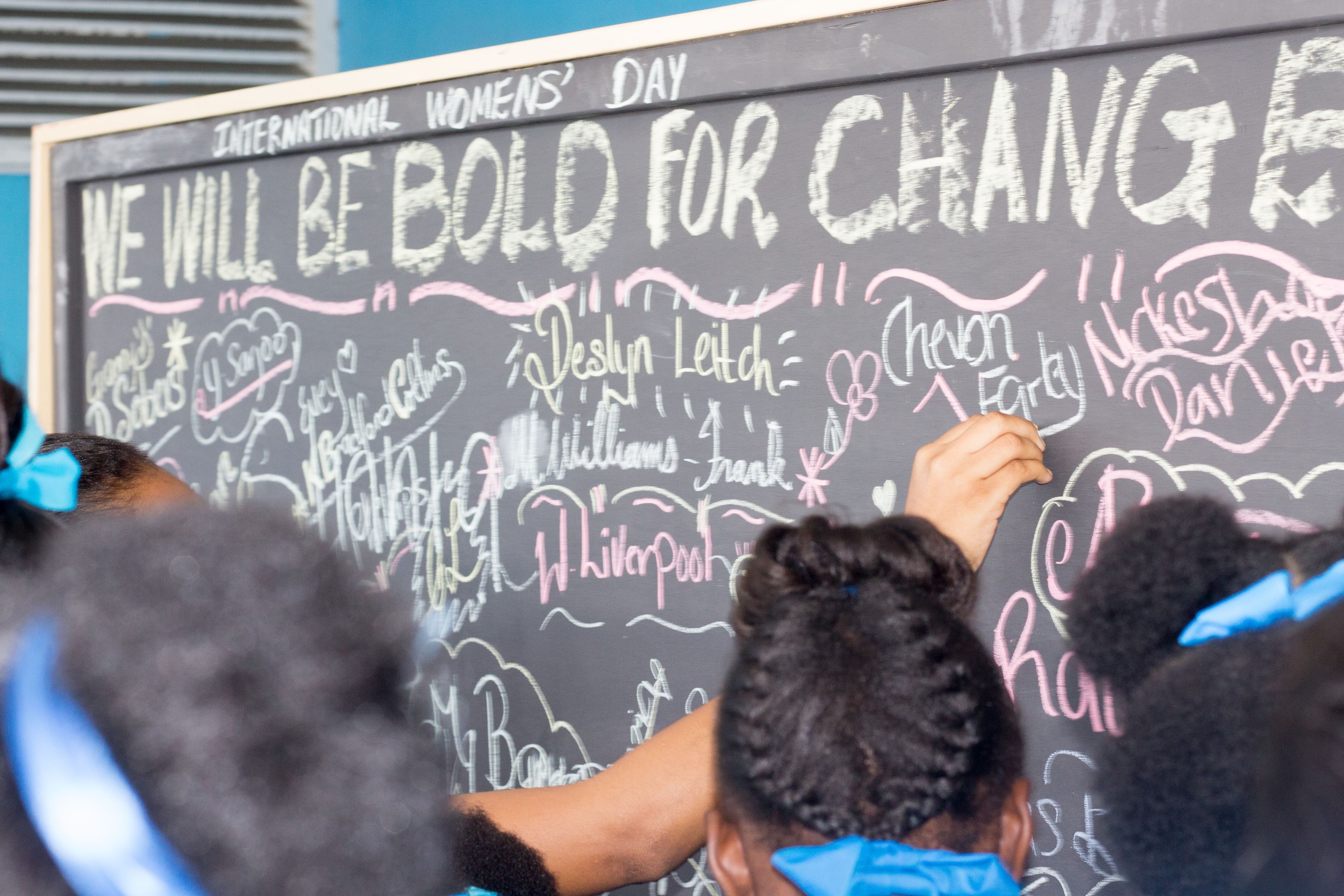 Under the theme “Women in the Changing World of Work: Planet 50-50 by 2030” and a call to action for all to #BeBoldForChange, Guyana joined the rest of the world in observing International Women’s Day yesterday, March 8.

Across social media, messages of hope, inspiration, encouragement, reflection and even some questionable posts inundated newsfeeds and timelines in anticipation of the global goal to achieve equality between men and women by 2030.

At home, teachers of the St Joseph High School, Woolford Avenue, took on the challenge of transferring the message and power of the observance, during a special assembly yesterday, to a post-1995 generation, seemingly disconnected with the significance of the observance that dates back to the early 1900s.

Although the official colour of the global observance is purple, school teachers donned yellow attire, and students were pinned with yellow ribbons ushering in a message of hope.

“We chose yellow to highlight our optimism in bringing about change within our society,” educator and key-organiser of the yesterday’s activity, Nima Flue-Bess, told the student gathering on the school’s patio.

The session was brief, but left students with an appreciation for the observance, as well as the shared responsibility of both sexes in honouring women. 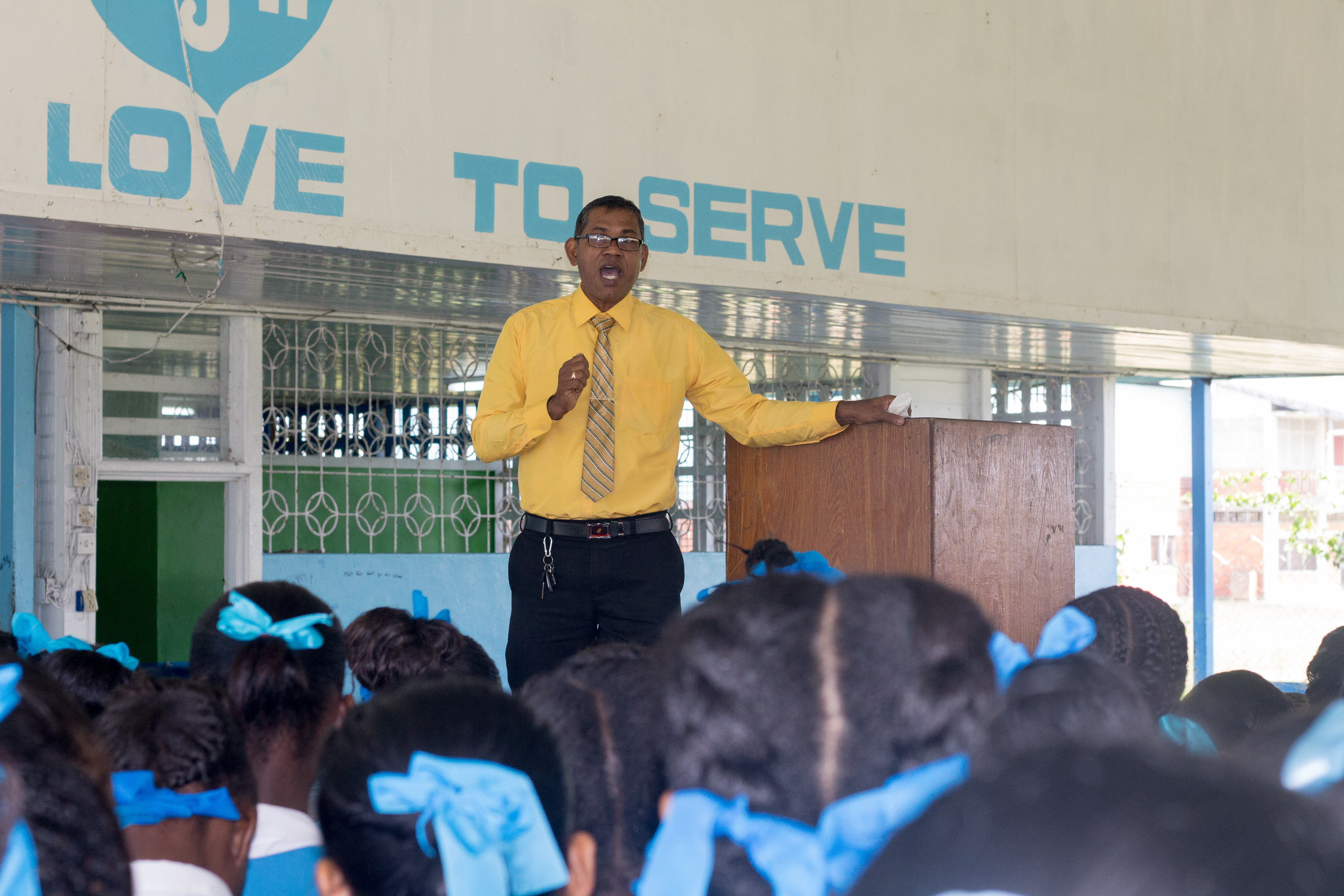 The school’s headmaster, Mr Raghubansi, addressing the special assembly in observance of IWD.

The school’s headmaster, Mr Nathram Raghubansi, took the stage to express his unwavering appreciation for the school’s predominantly women teachers, which is common within Guyana’s teaching profession.

“We have to start change at home and in the earliest days of school, so that there are no places in a child’s environment where they learn that girls must be less, have less, and dream smaller than boys,” an SJH pageant delegate, Ruth Wilson, told the gathering, as she read the message of UN Women’s executive director, Phumzile Mlambo-Ngcuka.

Meanwhile, Guyana’s First Lady, Sandra Granger, at another event yesterday hosted by the Social Protection Ministry, said, “women and girls comprise over 50 percent of the population of Guyana. So we are, in a sense, ideally placed to demand equality.” The First Lady, also a former student of SJH, was honoured yesterday at SJH’s IWD assembly.

The First Lady noted the glass ceiling which still affects women’s ability to progress in professions like the military, traditionally dominated by men. “The glass ceiling remained very much in place since women officers were not selected for senior command and staff courses overseas or senior specialist training. This limited their field for ambition and prevented them from aspiring to the highest levels of command in our army.”

President David Granger yesterday made a commitment, during a women’s day activity at Eve Leary, to challenge the structural barriers which hinder women empowerment and the equality of the sexes.

“Gender parity cannot be achieved in the absence of a more equal society,” President Granger said yesterday at an IWD event, according to the Ministry of the Presidency.

“Enforcement of legislation to protect women, to prevent abuse and to promote greater equality must be more robust. The disparities between hinterland and coastland and between rural and urban communities, for example, must be reduced,” the President noted. 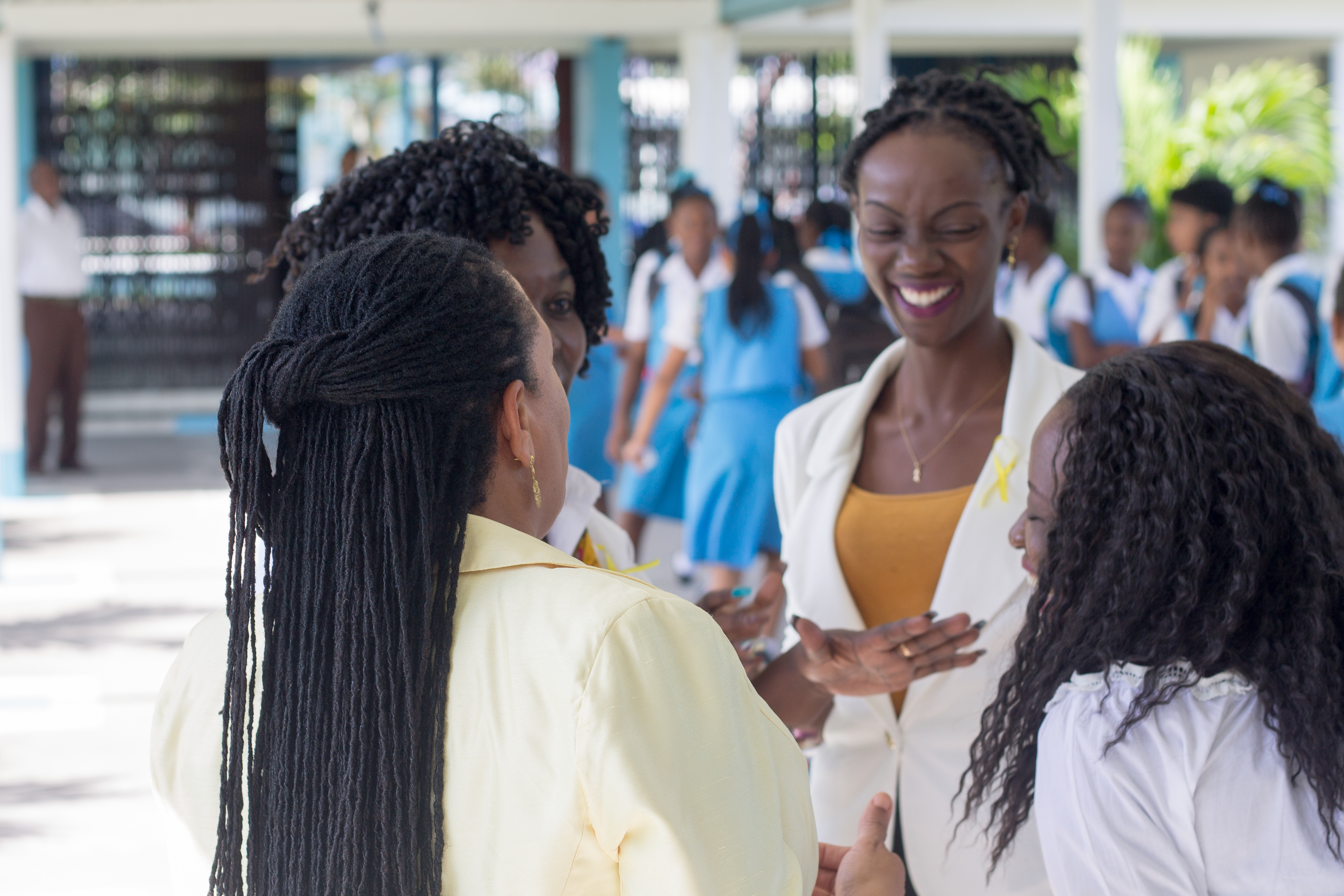