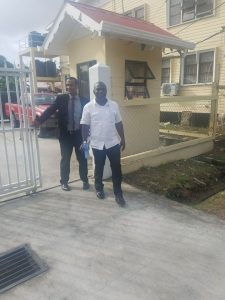 Kwame Mc Coy leaving SOCU in the company of his lawyer, Mark Conway.

Former director of  Guyana’s state radio and television broadcaster, National Communications Network (NCN), Kwame Mc Coy, was Thursday questioned about the relocation of the Sparendaam radio transmission station’s mast nearby where several house lots have been allocated to then government ministers and other officials.

“Basically, they wanted to know about my role in this entire saga of the Pradoville 2, specifically as it relates to me as a director and my role on the NCN Board which would have at some point been responsible for the relocation of the Sparendaam tower,” he told reporters moments after exiting the Guyana Police Force’s Special Organised Crime Unit (SOCU).

Mc Coy, in the company of his attorney-at-law Mark Conway, declined to say whether he had been instrumental in deciding on the removal of the AM antenna mast. Experts said the approximately 500 feet tall mast was in the take-off flight path for aircraft using the Ogle Airport and that aviation authorities had recommended since the early 2000s that it should be dismantled.

The mast and the Sparendaam transmission station were eventually relocated to Parfaite Harmonie, West Bank Demerara and shortly after the nearby lands at Ogle and Sparendaam were sold to several then government ministers, former President Bharrat Jagdeo and other senior government officials. 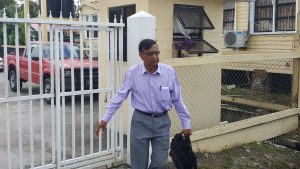 Mc Coy said he was not under arrest and he was not told by SOCU investigators that he would have to return.

Also questioned earlier this week about the removal of the mast and development of the area for housing were former NCN Board Chairman and Permanent Secretary of the Ministry of Housing, Dr. Nankishore Gopaul and former Housing Minister and Chief Executive Officer of Guyana Water Incorporated, Shaik Baksh.

Former Head of the Office of Climate Change, Andrew Bishop was also questioned on Thursday, but he declined to speak with the media on leaving SOCU.

Bishop, in a separate matter still before the High Court, has been identified as one of those who had purchased land at Ogle-Sparendaam, also known as Pradoville.

Attorney-at-Law, Anil Nandlall said Tuesday that there are no grounds to successfully argue that the then government had illegally sold the house lots at below market prices because housing lands provided to ordinary citizens in other areas have also been provided at below market prices such as between GUD$58,000 and GYD$200,000.