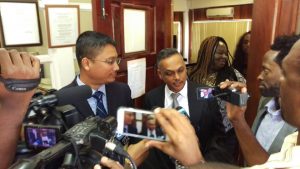 Guyana’s Court of Appeal on Monday dismissed an appeal by several members of the lesbian and gay community seeking clarification on a ruling made by former Chief Justice Ian Chang on cross-dressing.

The panel upheld the decision of then  Chief Justice, Ian Chang, which said that cross-dressing in Guyana was legal, unless it was done for an improper purpose. There was no clarification on what constitutes an “improper” purpose.

The court said today that it is not for the court of law to define what Parliament has not. The Summary Jurisdiction Act which criminalised men and women, presenting themselves in attire of the opposite sex, came into effect in 1893.

Attorney-at-Law representing the appellants, Arif Bulkan, said the ruling now means the court has free reign to determine what constitutes an improper purpose on a case by case basis.

Representing the state, through Attorney General chambers, in the matter was attorney Kamal Ramkarran.

The case which was initially filed in February 2010, following the widely reported arrests and convictions of seven trans persons for the 1893 summary offence of ‘being a man’ and wearing ‘female’ attire in a public way or public place, for an ‘improper purpose.

The McEwan case argues that the archaic cross-dressing law, found in section 153 (1) (xlvii) of the Summary Jurisdiction (Offences) Act 1893, is inconsistent with the Guyana Constitution.

Representatives of the Society Against Sexual Orientation Discrimination (SASOD) and the Guyana Trans United (GTU), who were in court expressed disappointed and said a statement would be issued later.

Chancellor Singh told the court an improper purpose would be a man who presents himself in female attire, enters a taxi and robs that taxi.