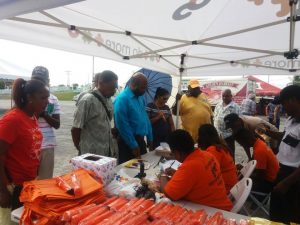 The Guyana Telephone and Telegraph Company (GTT) Monday (February 27, 2017) rolled out its fixed Long Term Evolution (LTE) ‘lightening fast’  internet service on the Essequibo Coast—four months ahead of schedule—with a promise to revolutionize the way business is conducted between Charity and Supenaam.

GTT’s Chief Executive Officer (CEO), Justin Nedd, in launching the high speed internet access for Essequibians told those gathered at the Anna Regina, ‘Car Park Tarmac’ that the move was in direct response to the numerous pleas made by its customers in that locale.

“We have listened to you, we have seen the requests on Facebook, we have heard the calls to our Call Centre…We hear you asking for a long time for high speed internet and today we answer that call.”

He used the occasion to point out that while the company would have announced a roll out for high speed internet for Essequibo for the end of June, the diligent efforts of the technical teams at GTT made it possible for the service to be rolled out four months earlier.

Speaking to what exactly the improved service will mean for Essequibo, Nedd told those gathered it is indeed a life changing initiative and pointed to opportunities that will now exist for students, businesses and even the ailing.

On the medical front, GTT’s CEO pointed out that with reliable high speed internet service the medical fraternity can be in real time communication with their counterparts in Georgetown and further afield.

“Somebody at the hospital can easily see a doctor in Georgetown or anywhere in the world because there is the internet and connectivity provided by GTT.”

According to Nedd, students will also now be in a better position with regards research and in fact will now be afforded the same educational opportunities experienced by students across the world where there is high speed internet connectivity.

This, he said, is in addition to the numerous other services available such as video chat, skype, snapchat, facetime and other streaming services—all meant to “make your lives better.”

He was adamant that the roll out of the 4G service on the Essequibo Coast was just another step in bridging the digital divide, saying “we have a few surprises to announce very soon, this is not the end, will be here again in a few months telling you about other things for the Essequibo Coast.”

Minister with responsibility for the Telecommunications Sector, Catherine Hughes, was also among those present for the launch of the new GTT service and used the opportunity to address the modest gathering to challenge the business community and students particularly, to take full advantage of the service and its accompanying horizons.

According to Hughes, even before current administration took Office just about two years ago, they were cognizant of the fact that Guyana was in fact lagging behind its regional counterparts and the developed world in terms of its inabilities on the connectivity front.

Such a state of affairs, according to Minister Hughes, “limited the possibility of citizens to get involved in the technology driven world.”

With the upgraded internet service now afforded to Essequibians, Minister Hughes said they will now be able to take full advantages of platforms such as e-commerce and international trade.

On the academic front, Minister Hughes spoke to Government’s intention of ensuring classrooms outside of major towns such as the Capital City being exposed to online facilities.

According to Minister Hughes, I truly believe that Information Communication Technology (ICT) will deliver the transformation in Guyana that we are yet to see and can improve quality of life for all Guyanese.”

She told those in attendance, technology is the greatest equalizer and that Guyanese are no longer at a disadvantage anymore.

In her appeal to take advantage of the opportunities being provided through the connectivity provided by GTT, Minister Hughes said the only limitation in today’s world “is the one you put on yourself…let me see what entrepreneurial skills lie in each of you, I say that especially to the students.”

She lamented the pitfalls were experienced as a result of the lack of connectivity and drew reference to when the Caribbean Examination Council (CXC) required all students to submit School Based Assessments (SBA) online.

“Guyana was not ready and that is not how it should be,” according to the subject Minister.

She lauded the initiative and investments by GTT saying that this was critical to the development of the nation and will complement government initiatives, including its push towards e-governance where all services provided by the administration will be available online.

In celebrating the vital infrastructure and investments by GTT, Minster Hughes said this is the trajectory that the coalition administration has been pushing for.

According to Hughes, the nation will only move forward if the private sector continues to invest in its services provided, “this nation will only expand with the support from commercial and manufacturing sector.”

Staying true to its promises of making good on the company’s Corporate Social responsibility, GTT ‘s CEO also used the opportunity to make a donation to the Suddie Hospital, the location that had seen the pilot programme for the LTE service.

The company used the opportunity to make a donation to the pediatric ward of the Suddie Hospital which was graciously received on behalf of that unit by Dr Khilauti Das, who thanked Nedd “for such a lovely gesture.”

According to Dr Das, the LTE 4G service rolled out by GT&T goes beyond the service of communication and will not only benefit the hospital but the general population of Region.

Each of the customers in Essequibo to have purchased the service will be enjoying the high speed connectivity free of cost until the end of March.