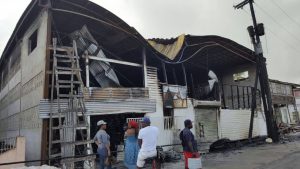 “We suspect it is arson. Someone broke the back of the building and set the fire,” Fire Chief, Marlon Gentle told Demerara Waves Online News.

Owner, Wesley Benjamin estimates his losses at more than GYD$10 million. He is thankful that very expensive ovens were saved from the fire that started after midnight.  “Thank God for Jesus that the main thing- the most expensive equipment there was the oven and I would thank God that was spared  from the fire… I have the faith, I have the encouragement and I think I am strong to go through what I am going through,” he said.

Despite the setback, Benjamin hopes to resume operations at Buxton in another two months, but in the interim assures the more than 40 vendors that he will  continue supplying from Tuesday. He has another bakery in Berbice where he was when the fire started in Buxton. 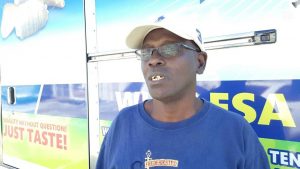 He said the fire started in the office where there are computers and equipment related to video surveillance cameras. Benjamin theorized that the fire could be the work of arsonists because there is an ongoing land dispute.

“The land has an issue. That is the only thing I know. That land in court for twenty-three years now or more  and only January the guy called concerning the land, his friend called…He always put his friend to call and say this thing (dispute) could done out of the court because the land belongs to him, he has the transport so I does always tell them that you all got to get on to the people who own the business who 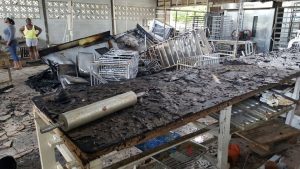 I take it from and that was it so I don’t know if it was any threat with them or the people who I start buying the place from,” he said.

Benjamin stressed he believed arsonists were responsible for the fire, but he was not entirely sure.