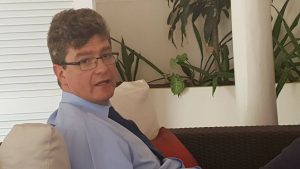 Britain says while Guyana appears to be progressing towards commercial oil production, there appears to be no clear indication on how the South American nation will spend some of the revenues.

High Commissioner to Guyana, Greg Quinn said Guyanese stakeholders need to discuss how the money should be spent on the social sectors and infrastructure while putting some of the earnings in a Sovereign Wealth Fund.

“The sort of conversation, which I know is happening, is already happening around those two areas, but what I would like to see a bit more detail about is exactly what the strategy is for spending the money,” he told a news briefing at his Bel Air Gardens residence.

He said the United Kingdom would be willing to assist Guyana in developing a strategy to spend the oil revenues, but he suggested that the international community needed to ensure there was no unnecessary replication of efforts.

Quinn cited the need for a “continuing discussion” among civil society, the population, politicians and civil servants “about which areas need the money that will come out of oil and how you prioritise those areas.”

Minister of Natural Resources, Raphael Trotman has said countrywide consultations would be held with ordinary Guyanese about the implications of the massive oil find for Guyana’s future.

He acknowledged that Canada has been assisting Guyana in forging ahead with discussions on how the Sovereign Wealth Fund should be created and managed. “What you can’t do is spend all the money. You have to prepare for a rainy day,” he said.

Guyana is expected to begin producing 100,000 barrels of oil daily from the more than 2 billion barrels that have been found offshore Guyana by the American oil giant, ExxonMobil.  Trotman has said the Production Sharing Agreement provides for 75 percent of every barrel of oil produced to go towards the cost of investment while the remaining 25 percent profit will be split equally between ExxonMobil and Guyana.

The United States (US) has already urged Guyana to spend  some of the revenues from oil on the social sectors and infrastructure with the partial aim of creating numerous jobs. The offshore oil production operation caters for just about 100 jobs.

Government hopes that a onshore support base at Crab Island will create at least 600 jobs. An expert has been hired to examine the feasibility of Guyana building an oil refinery.