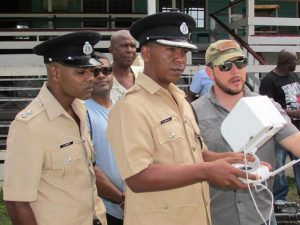 Assistant Commissioner of Police, Brutus flies one of the drones.

Guyana Goldfields/AGM Inc. recently introduced a dozen media personnel and nearly twenty officers and ranks of the Guyana police force to the immense possibilities of the application of drone technology to their respective jobs, the company said in a statement.

Officially they are referred to as UAVs (Unmanned Aerial Vehicles) or RPAS (Remotely Piloted Aerial Systems). However, they are more commonly known as drones. Drones. They are used in situations where manned flight is considered too risky or difficult or where it is much more cost efficient to achieve similar or greater results than by using helicopters or other aircraft to do jobs that drones can do more effectively.

At AGM Inc.,  Guyana’s largest gold mine, this  emerging technology is being applied to enhance its monitoring capabilities for the environment, dam integrity checks, security patrols, accident reviews, mine survey and blast monitoring among a myriad of other uses.  The company continues to push the envelope of utilizing cutting edge technology in all sectors of its work. This new effort, has seen AGM acquire  four drones  and  have provided training for fourteen newly qualified drone pilots. However, AGM Inc. has also made moves to share the possibilities of this new technology with other Guyanese agencies, as it moves to fulfill its mandate of partnership for development through the transfer of skills and technology. 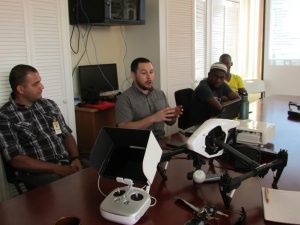 On Saturday February 17th, the media was first briefed on the responsible use of the technology, with representatives from Demerara Waves, the National Communications Network and some  private local enthusiasts receiving instruction from drone expert and owner of Aerial Resources Group Nick Henderson, who is also a qualified commercial helicopter pilot.  Henderson has been contracted by AGM Inc. to examine the areas in which drones could be of strategic use to the company, to assist in the acquisition of the equipment and to train pilots in their operations and application of the technology to the mine’s work demands.  His support was then enlisted to provide the briefing to these two groups to allow them to similarly assess how this technology could be of use in the media and security sectors at AGM Inc.’s Thomas Street Office.

Senior ranks of the Guyana Police Force were enthusiastic at the opportunity to be hands on with the technology touted to be a ‘force multiplier’ in the sense that a drone covers much more of an area than an officer on the ground.  It also offers a tactical platform to inform the deployment of resources much more efficiently, and with the use of appropriate cameras, could also allow the security sector to stand off and assess threats without putting their human resources at undue risk.

Senior Superintendent Kevin Adonis joined Assistant Commissioners Christopher Griffith and Clifton Hicken at the briefing and training session at the Officer’s Training School, Eve Leary, before Snr. Supt. Calvin Brutus got hands on with the tech, flying a mission under Henderson’s instruction from the Police Sports Club Ground, to survey traffic as far out as Quamina Street and along the Georgetown Seawall.