Code of Conduct and reforms to Constitution, Integrity Commission will help keep away “dirty fingers” from oil earnings- Nagamootoo 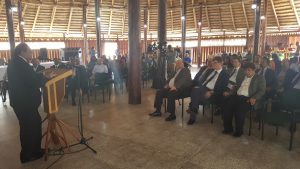 Prime  Minister, Moses Nagamootoo on Wednesday said further reform of Guyana’s constitution,  revival of the Integrity Commission and a Code of Conduct for elected officials are aimed at ensuring officials do not steal public funds including those garnered from the oil and gas industry and other natural resource sectors.

“I am serious about constitutional reform because it is going to become the bedrock upon which we build all these lofty edifices like G- EITI (Guyana Extractive Industries Transparency Initiative ) upon which the MSG (Multi-Stakeholder Group) will mount its monitoring, evaluating and advising on how our extractive industries could best serve our society,” he said.

Addressing the launch of the Guyana Extractive Industries Transparency Initiative Multi-Stakeholder Group (G-EITI MSG) at the Umana Yana, Nagamootoo welcomed the United Nations Development Programme’s (UNDP) support in providing experts and consultants to help overhaul the constitution to ensure greater participation and multiparty governance in a racially diverse country. “The experts would be necessary and they didn’t come here to monopolise or to seize the process. They came to find out after consultation how they can assist it with technical personnel and even to tap into donor support financially and also in the technical regard,” he said.

Back in 2012, Guyana decided to join the Norway-headquartered Extractive Industries Transparency Initiative to foster accountability and transparency in the natural resources sector. The country now hopes to formally join that institution before the end of 2017.

Now that the Steering Committee on Constitutional Reform has already mapped out the scope of the intended reforms, he announced that legislation would soon be tabled in the National Assembly to establish a Constitutional Reform Commission to conduct hearings at more than 100 communities across Guyana. He said civil society and the opposition People’s Progressive Party (PPP) would be consulted on formulating the law to set up mechanisms for constitutional reform.

The Prime Minister acknowledged that removing certain provisions of Guyana’s constitution that dates back to 1980 would face serious difficulties. “Shades of authoritarianism and executive abuse have been entrenched and are not gonna be easy to be removed so for those who think that constitutional reform is a slogan or that it could be achieved easily, our own history has show that it is a fight, that it is a struggle,” he said.

The reform of the 1980 constitution dates back to 1995 when a Reform Commission had been established. That work had been interrupted by the 1997 general elections and later continued in 1997 in keeping with an agreement between the then PPP-Civic led government and the the opposition People’s National Congress (PNC) at the time. The constitutional reforms were enacted in 2000.

The Prime Minister announced that the law would eventually be changed to provide for consultations for the appointment of a Chairman of the Integrity Commission.

“…to have a process by which the Chairman of the Integrity Commission could be selected from consultation and not being the subject of any political dictat,” he said.

He said Cabinet has received a package of amendments to the Integrity Commission Act.

Nagamootoo lamented that the Commission has not had a chairman since 2006 when Anglican Bishop, Randolph George resigned. He said  the Integrity Commission must be fully functional to ensure that parliamentarians and other senior public officials declare their assets at a time when Guyana is preparing to produce oil in 2020. “It is headless, it was beheaded and it remains headless to this day and we need a process by which we could have this important body reconstituted and perform the functions for which it had been established to ensure that we don’t have officials and others associated with officials, interested persons benefitting from disproportionate wealth, benefitting from ill-gotten or unjust enrichment,” he said.

Nagamootoo said decision-makers could easily be tempted to cream off revenues from oil, gas, forestry, carbon credits, gold and other mining industries. “When you look at that yo also see that there is temptation for those who would have access to personnel and to offices and to companies; that you have to insulate them from dipping their dirty fingers into the cookie jar and you need to strengthen integrity legislation in Guyana,” he said.

The Prime Minister restated government’s desire to have a Code of Conduct for elected office holders to set an example for corporate and civil society leaders to be “clean.” “We must set up guidelines and we must build a fence that will insulate them… to protect them from being contaminated,” he said.

For several years now, the United States has been spearheading efforts to ensure there is transparency and accountability in using oil and other natural resource revenues for the sustainable development of Guyana.