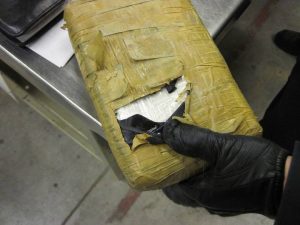 (globalnews.ca ).-More than seven kilograms of cocaine were found hidden under an airplane’s catering carts at Toronto’s Pearson International Airport, according to the Canada Border Services Agency (CBSA).

CBSA officials, couldn’t say where the flight originated from, but told NEWSTALK1010, they believed it came from the Carribean.

CBSA officers noticed “anomalies” on the aircraft’s food trolleys while searching an unspecified aircraft on Feb. 8.

After an “intensified investigation,” officers discovered seven brick-shaped packages attached to the bottom of the carts, which were wrapped in plastic and contained a white powder.

CBSA said the powder tested positive for cocaine and was turned over to authorities, but would not specify which law enforcement agency was investigating.

RCMP spokeswoman Penny Hermann would not confirm if the national police force was investigating the incident.

CBSA declined to specify which airline’s plane the packages were found on or what country the plane originated from.

“CBSA officers are always on the lookout for contraband,” Goran Vragovic, a CBSA regional director general for the Greater Toronto Area said in a release. 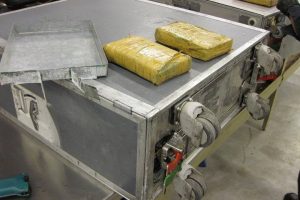 “This seizure demonstrates our commitment to Canadians to intercept illegal narcotics and prevent them from hitting the streets of our communities.”

The agency said it seized over 1,569 kilograms of suspected cocaine in the Greater Toronto Area last year.

Anyone with information on suspicious cross-border activity is asked to contact the CBSA Border Watch Toll-free line at 1-888-502-9060.