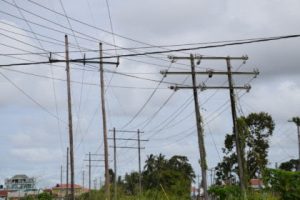 The transmission lines at Vlissengen Road and Lamaha Street that connected with each other, causing the system shut down on Sunday night

He said that normally it would take one hour, but this time it went beyond that time due to a particular issue.

The Acting CEO was at the time giving an update on the recent spate of power outages which started on Sunday night, and which affected a number of areas that are fed by the Kingston and Sophia transmission lines.

Homer said that on Monday GPL tried to identify what occurred during the power outage, and while identifying the problems, several other issues were also encountered.

“Close to midday, they identified a major issue along this corridor (Lamaha Street & Vlissengen Road). This is where one of the conductors with voltage of 13 KW (Kilowatts) came into contact with the main transmission line which is a 69- KV(Kilovolts) line. So the two came together and that caused the fire explosion that disturbed the entire network,” Homer was quoted as saying by the Government Information Agency (GINA).

The Acting CEO told media operatives that between 03:00hours and 17:30hours, GPL de-energised the transmission line along with the one linking Vreed-en-Hoop to Kingston, so residents in some parts of Queenstown, Prashad Nagar, Kitty, and Subryanville were affected for an extended period. The problem was rectified after 17:00hours yesterday (Monday), Homer said.

“A disturbance of that nature could have a rippling effect and the F9 transmission line (Kitty) was the one that suffered severe shock, so earlier this morning, we had a disturbance and this is believed to be an after effect (of) what took place on Sunday. GPL then got four of the transmission distribution crew and they combed the length of the F9 feeder and the F3 feeder which feeds central Georgetown,” the CEO said.

Homer said that what was discovered this morning is that the F9 feeder was entangled with the F3 feeder and led to a disruption that eventually brought one of the generators down. The CEO explained that the intention was to look for defects along the corridor that could cause a feedback and lead to complications.

“We believe we have done a comprehensive check and should not be in a similar situation again,” the CEO said.

Homer noted that there are several issues that need to be fixed on the network, and that GPL has done work over time, but more needs to be done. He pointed out that the system has exhibited an acceptable performance, and there are initiatives that GPL is working on to identify the faults and have them rectified.

Additionally, Minister of Public Infrastructure David Patterson said that there is a distribution problem and the system needs upgrading. The Minister pointed out that US$31M from GPL funding will be used over the next two years for upgrading the system and for developing an alternative line. Minister Patterson noted that tenders were recently opened for this project.

“It’s one of the challenges that GPL and the government is faced with right now .There have been complaints as to why are the lines like that and who did it and who is wrong and who is right, but they are all academic for me, but this is what we have inherited and this is what we are addressing,” Minister Patterson explained.

The Minister pointed out that the system is made to protect itself, so that when there are spikes it shuts down.