Eye On The Issues: ‘Mash Meters’ and ‘boot clampers’ next by GHK Lall

poking fun at the Parking Meters… 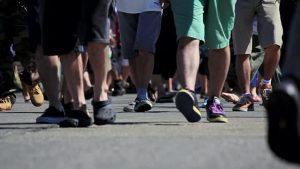 Guyanese need to get real and get down to brass tacks.  That should be taken literally, as what is planned by Big Brother is down low, and promises to be sharp and piercing.

Citizens have to stop harping and complaining and protesting about parking meters.  Instead, they should be more concerned, and seriously so, about what is on the way, and soon, as in the short span of a few days.  This is about the big picture and prioritizing what really matters.  This will bring the soreness of calluses and corns, financially speaking.

What has been conceived and is about to be unleashed on an unsuspecting celebrating public is to be called “Mash Meters.”  It could also be called a stealth tax, but one without any VAT surcharge.  One must be thankful for small mercies and a compassionate government.

This move (un-gazetted) by government is both innovative and all encompassing.  None will be spared; this is inclusion on the tramp and on the march.  It works this way:  Every citizen (including Mash abstainers) has to be fitted with a Mash Meter device to the soles of their shoes; opposition supporters have the dubious honor of being assigned a meter for each shoe.  It is understood that there is a line stretching all the way to Duke Street (no, these are not U.S. visa applicants) from the St. Joseph’s mercy Hospital.  Previously robust, previously fully mobile citizens are seeking orthopedic advice and device on how to evade the coming Mash Meter tax, through miraculously discovered foot ailments.  The watchdog medical council is watching closely and suspiciously.  Business is brisk, but many are turned away to the wolves.  And they are there.

These wolves get government issued clothing, are on the prowl, as they enthusiastically inspect boots.  That is their official title: Mash Meter Boot Inspector.  It is a much sought after, well paying, prestigious job.  Those unfortunates (or tricksters) who are without officially issued Mash Meters will be subjected to the ignominy of public clamping, and involuntary bodily towing to secret destinations.  Any inebriated celebrants will be slapped with the charge of mashing under the influence, and mashing without a Mash Meter to boot.

To emphasize its identification with the plight of the mashers, and its own benevolent nature, any legitimately procured Mash Meter is to be exempt from VAT.  The word is that both the Commissioner General of the GRA and the Hon. Minister of Finance voiced strenuous objections but were overruled.  David!  David!  David!

Amidst the sure-to-follow furor, the intellectual side of Guyanese is appealed to, so that consideration can be given to the positive aspects of this Mash Meter development.  Yes, there are some.

It is that the demand for Mash Meter inspectors, clampers, haulers, processors, and pound managers is sure to lead the largest post-industrialization employment boom in the annals of this land.  Workers will have earnings power and spending power; Guysuco RIFs (reduction in force) would be lateraled to the city for gainful employment; and the sluggish economy would get a much need fillip and even soar.

In the midst of all of this, all citizens should recall what that partially recognized father of the nation once urged: don’t worry, be happy.  It is the same iconic figure who was so unceremoniously ejected from that illegal sublet in Kingston.  Now Guyanese are known far and wide for being a generous passive people.  They should forget about ax the tax, and give freely to a waiting, already counting government.  All ought to be ready to make a splash at Mash.  As they do so, it is wise to remember that the meter counts by the step.  The longer the march, the richer will be the government’s take; of course, it has weeded out its own people who might be on the take.

It is for a good cause.  In the meantime, plans are in motion on how to deal with boycotters, professional agitators, and paid protestors.  Happy Mash to one and all!  And don’t leave home without a meter.