Police being trained to handle sexual and domestic violence reports 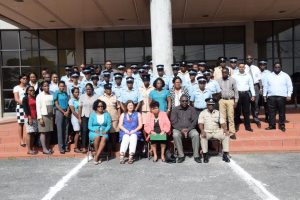 The Ministry of Social Protection through a collaborative effort with UNICEF, is training police ranks on how to handle cases of sexual and domestic violence.

At the opening of the training workshop, Minister of Social Protection, Amna Ally, said violence against women is a violation of their freedom, dignity, safety, human rights and must be condemned in all its forms.

Minister Ally said that the police response plays a significant role in protecting and bettering the lives of all victims. “Officers you are at the frontline of the criminal justice system….You work with victims, offenders, witnesses and gathering various forms of evidence. Therefore, your attitude and response to all involved can have a dramatic impact on ensuing developments including the prevention of future violent acts and the protection of victims,” Ally told the participants.

The Minister of Social Protection said that the problem of domestic violence is immense and is often seen as a private matter. She declared that it is a crime, a public and political issue and the nation has a responsibility to protect the victims and prosecute perpetrators.

“Over the years Guyana has seen a significant rise in the number of reported cases of victims of sexual crimes, which must be addressed with the utmost urgency. Violent practices that victimise women and girls transcend social, cultural, ethnic and religious boundaries,” Ally  was quoted as saying in a statement issued by the Government Information Agency (GINA).

The minister is confident that the training will result in better practices and application of effective measures to protect victims and witnesses. She said that for a long while the police has been criticised for not doing enough to protect women from violence. She urged more inter-agency collaboration and coordination of services to improve the safety of women.

UNICEF’s Country Representative to Guyana and Suriname, Sylvie Fouet, noted that initiatives against domestic violence will protect children. She said the training is the first step in eliminating the scourge of domestic and sexual violence. “This part of the training will serve really as a good stepping stone to rebuilding the trust in law enforcement; you always have the first part of contact,” she told participants.

Assistant Commissioner, Paul Williams, welcomed the training and noted that it will improve the capacity of the force to tackle domestic violence. He explained that since domestic violence caught the attention of the GPF, ongoing training activities were conducted from 1999 to 2016.

The Ministry of Social Protection with support from the United Nations Children’s Fund (UNICEF) has developed a National Plan of Action for the Implementation of the Sexual Offences and Domestic Violence Acts. It is currently being reviewed by the newly resuscitated National Task Force for the Prevention of Sexual Violence (NTFPSV) and other key stakeholders. The Plan of Action is guided by the Sexual Offences Act of 2010 and the Domestic Violence Act of 1996.

Last year, the protocols to equip Police Officers and other professionals with the necessary guidelines and procedures required to improve overall response to victims of sexual violence were developed by the Ministry of Social Protection with support from UNICEF.

The Police training sessions will be undertaken during the period February to March 2017.

2017-02-10
Denis Chabrol
Previous: Eye On The Issues: ‘Mash Meters’ and ‘boot clampers’ next by GHK Lall
Next: Diaspora Conference to be held in Guyana