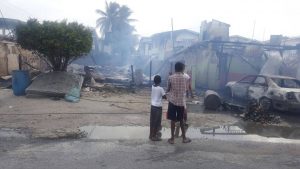 Three persons look on at the smouldering remains at the scene of the fire at Sandy Babb and Owen Streets, Kitty. ( photo by Volunteer Reporter)

Initial estimates are that at least 10 persons are now homeless.

A  liquor restaurant, which included a dwelling, and two other houses were destroyed by the blaze that began at about 1 AM.

Gentle told Demerara Waves Online News that due to the absence of fire hydrants in that area, fire fighters resorted to using water from the Vlissengen Road canal.

He said numerous fire tenders from stations across Georgetown were also deployed to the fire scene. 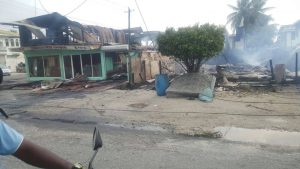 The liquor restaurant at the corner of Sandy Babb and Owen Streets, Kitty (Photo by Volunteer Reporter)

“Historically, we have always had a situation of poor water supply and closeness of the buildings,” he said.

Before the arrival of the fire tenders, neighbours said they heard loud explosions and initially thought they were gunshots.

This is the second major fire in less than two days; the first one having occurred at Fourth Street, Agricola on Wednesday afternoon.

Five persons were rendered homeless in that fire at Agricola.