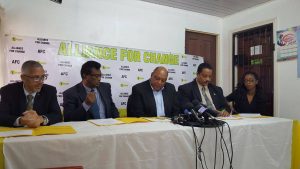 Leader of the Alliance For Change (AFC), Raphael Trotman on Thursday dismissed suggestions that he would be compromised because he was handpicked by President David Granger to be appointed a government minister.

“We are extra appointees and in no way has there been a demonstration of a compromise or a compromising of or a conflict of interest demonstrated by any of the ministers named. We have served within the Cabinet, within the government and within the party,” said Trotman, who is Minister of Natural Resources, said when asked by Demerara Waves Online News.

Trotman is a former executive member of the People’s National Congress Reform (PNCR) who broke away and teamed up with expelled People’s Progressive Party (PPP) Executive Member, Khemraj Ramjattan and Sheila Holder to form the AFC more than 12 years ago.

However,  the Minister of Natural Resources said the evidence shows that they have not been compromised.  “I don’t believe that anyone, who wishes to be reasonable objective and true to themselves, would raise an argument that I as leader, Mr. Gaskin or Mr. Holder would be compromised because we didn’t come exactly through the terms of the Cummingsburg Accord,” Trotman ,

At the previous National Conference, he had not been elected or nominated to the AFC’s management committee.