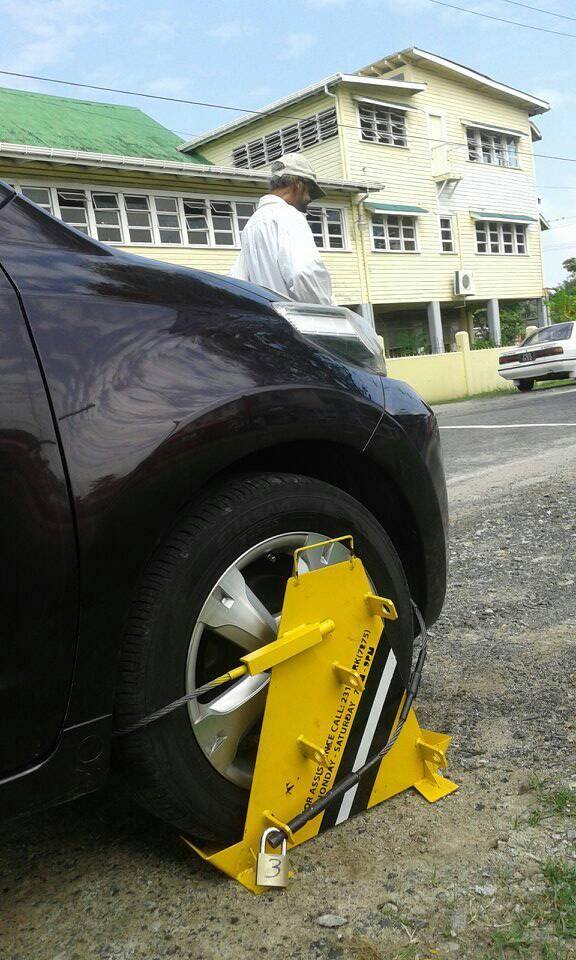 A vehicle clamped outside The Bishops’ High School in Georgetown.
Coen Jackson photo.

While the city’s parking meter laws have already gone into effect, Cabinet Secretary and State Minister Joseph Harmon told the press corp today the by-laws are yet to be reviewed by the Attorney General, and given final Cabinet approval.

Harmon said the council is fully authorised to institute parking meters, when asked if it is appropriate for the city to implement laws yet to be reviewed and approved by Cabinet through the process. Reviewing the by-laws, according to the Minister, is to ensure these laws are in keeping with national laws.

The minister believes the laws should be examined to determine groups which should be exempted from the regime, including the diplomatic community, and certain state agencies.

The Brickdam Road section of the Cathedral of the Immaculate Conception (Brickdam Cathedral) had recently been designated a paid-parking zone, raising concerns from parishioners. “Pay and pray,” was the comment raised by one social media commentator who said the Church should be exempt.

“I don’t know. I’m not City Council,” Minister Harmon responded when asked if churches should be exempt from the parking meter regime. “I have no view on the matter.” The church is recognised in city laws as charitable organisations and already exempt from certain taxes.

The Minister said it is feasible for individual approaches to the City Council to be made, as was done with the Guyana Teachers’ Union (GTU) which staged a 100-person protest just a few days ago against the all-around treatment of teachers, compounded by the parking meter fiasco.

It was brought to Minister Harmon’s attention that Communities Minister Ronald Bulkan already said in the Stabroek News that the Attorney General reviewed the parking meter by-laws before he, Bulkan, attached his signature.

Harmon said the by-laws “are a fairly thick document and as much as they are signed off by minister of communities, it still has to go through a process of vetting with the Attorney General. The by-laws themselves have been sent to AG for review before Cabinet gives final determination.”

Meanwhile, citizens continue to resist the implementation of the shady parking meter project. Paid-parking zones have been almost deserted by drivers, and organisers are prepared to stage a protest outside City Hall at noon on February 3, 2017.