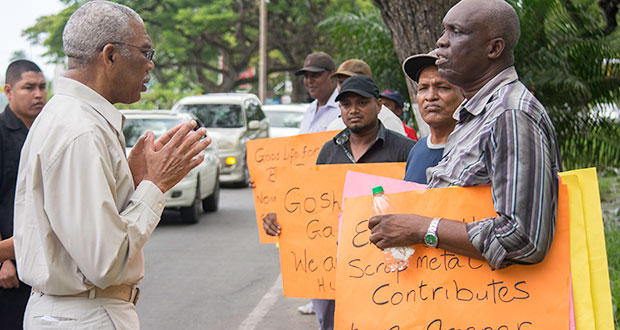 Government has approved a temporary restart of the scrap metal trade, according to Cabinet Secretary and State Minister Joseph Harmon, who said cabinet recently approved the proposal made by the Business Minister last september.

Harmon said there has been a process of bring onstream a new set of measures. “The process of putting together new regulations and guidelines by the Ministry has been ongoing, and the Ministry now feels that it is in a position to authorise a limited restart to the scrap metal trade,” the Minister told the press corps this morning.

Harmon said observations were made of a large build-up of scrap metal across region 4 as a result of trade being closed for past 19 months.

“Cabinet has therefore approved the Ministry of Business proposal to allow exporters to ship out the existing stock for a limited period of three months,” he continued.

The local scrap metal organisation had, just November last, expressed concern about the Government’s trade-ban not being lifted after 16 months. At the time, the association complained there was hardly any word coming from the administration.

The association staged a protest action outside President David Granger’s Vlissengen Road office in August last, where the President himself came out to address them.

The body’s secretary, Michael Benjamin, explained to Mr Granger the implications of the ban on their business, including bank arrangements and arrangements with exporters and overseas interests.