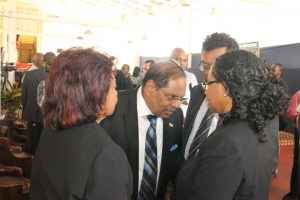 Prime Minister Moses Nagamootoo on Thursday appeared to publicly scold Attorney General and Minister of Legal Affairs, Basil Williams and the state-owned Guyana Chronicle about attacks on Chancellor of the Judiciary, Carl Singh who will be handing down his decision on whether the two-term presidential limit is constitutional.

Addressing the opening of the Annual Police Officers’ Conference, he suggested that critcising court decisions is different from attacking the legislature and the judiciary. “Our government does not encourage attacks on the legislature and the judiciary. It is not government’s policy or decision to besmirch the character of any judicial officer,” said Nagamootoo who is acting President.

Being challenged at the Court of Appeal is then Chief Justice, Ian Chang’s ruling that certain aspects of Guyana’s constitution could only be amended by a referendum and so the amendment by a two-thirds majority to facilitate a two-term limit on the presidency was unconstitutional.

The Prime Minister said the APNU+AFC-led administration would not tolerate attacks on officers of the court regardless of the intention or motive. “Our government would not condone attempts , however well meaning or veiled, to impugn the integrity of judicial officers,” he said.

It was also an apparent reaction to concerns by Senior Counsel Ralph Ramkarran that recent reports attacking the Chancellor of the Judiciary appeared to be government policy because Prime Minister Nagamootoo  was silent. However, Nagamootoo on Thursday deemed as “scurrilous” recent stories about Acting Chancellor Singh who retires next month from his substantive post as Chief Justice.

A recent report in the state-owned newspaper referring to Chancellor Singh completing certain cases ahead of  impending retirement on February 23, 2017 angered Singh to the point of vowing to continue his functions. “Not when the Chronicle says I must leave. My constitutional tenure expires on the 23rd of February, 2017, and until such time unless my appointment is revoked, I intend to exercise my functions as a judge,” he said.

The Prime Minister’s stated position came one day after the Attorney General denied attacking the Chancellor but strongly suggested that his (Singh’s) office had been empowered by then President Bharrat Jagdeo to take full responsibility for magistrates, judges and appeal court judges, resulting in a blurring of the lines of responsibility with the Chief Justice.

“The powers were removed from the Chief Justice’s office and reposed in the office of Chancellor and then what they did was when there was a meeting of the Opposition Leader and the President to determine who should be Chancellor and Chief Justice, Jagdeo always asserted Carl Singh to be the Chancellor. Why? Because he prepared a wicket…” Williams said.

The Attorney General said such a situation has led to Chancellor being responsible for an unhealthy situation leading from the magistrates’ court to the Court of Appeal.. “It means then that at the end of the day he would be sitting on appeal of decisions made by people he had actually handpicked to sit in cases and that couldn’t be well for the administration of justice,” he said.

Senior Counsel Ramkarran has since expressed grave concern about the Attorney General and Minister of Legal Affairs’ posture in relation to the Chancellor, warning that it amounts to political intimidation from the executive to the current and future Chief Justice and Chancellor.  “This open, blatant and shameless intimidation, is not meant only for this Chancellor. It is a message to the next Chancellor and Chief Justice, who will be appointed shortly, and for the entire judiciary, to toe the line. Neither the judiciary, the Bar nor the public can afford to be silent at these alarming developments. If not arrested now, they will only get worse”, said Ramkarran, a former executive member of the now opposition People’s Progressive Party (PPP).