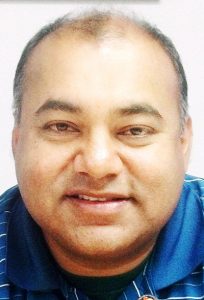 Prime Minister Moses Nagamootoo says his son-in-law is helping to find potential investors in the financially crippled state-owned Guyana Sugar Corporation (Guysuco) but he scoffed at suggestions of political favouritism.

Although a Guyana government statement days ago named Guyana-born American Tony Joseph, Director of Sunrise Investing LLC, as one of three investors who were expected to meet with him after touring the estates, Nagamootoo said “none, as far as I am aware” when asked what role he was playing.

“As far as I am aware he is a credible and successful businessman who is not investor. He is, I understand here, as a finder to introduce investors to help Guyana at no cost to the government or people,” he told Demerara Waves Online News.

Pressed on Joseph’s role, the Prime Minister said “I am not aware that he has any role. Why don’t you ask him.”

Joseph- known for his freight forwarding business in Muscatine, Idaho- is married to the Prime Minister’s daughter, Angela.

The Prime Minister reacted sharply when it was suggested that Joseph’s involvement was similar to the highly criticized friendship of former President Bharrat Jagdeo and Managing Director of New Guyana Pharmaceutical Corporation (New GPC), Dr. Ranjisinghi ‘Bobby’ Ramroop. “I am not aware of any what you are saying and your inference is unacceptable so don’t button-hole me on things…Stick to the police,” he said shortly after delivering the feature address at the opening of the Guyana Police Force’s 2017 Officers’ Conference. 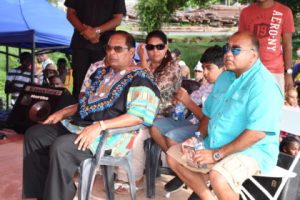 FLASH BACK: Prime Minister accompanied by his eldest daughter Mrs. Angela Nagamootoo-Joseph, her husband Tony Joseph and their two children at Emancipation Day activities in the National Park on August 1, 2016 (GINA photo)

While in opposition, Nagamootoo’s Alliance For Change (AFC) and A Partnership for National Unity (APNU) had stridently criticized the multi-million dollar sale of New GPC drugs to the public health sector. New GPC had been a prequalified supplier.

Integrated Casetech Consultants has supplied sugar production equipment to several countries including Zimbabwe. In 2014, that company had been named as source of engineers  to run the problem-plagued US$150 million Skeldon Sugar Factory.

Joseph heads a freight forwarding company, Joseph Pack-n-Ship in Muscatine, Iowa. His Guyanese wife, Angela Nagamootoo-Joseph, worked in the marketing department of the Mirror newspaper, a publication aligned to the opposition People’s Progressive Party (PPP).  Back in October 8, 2015, Prime Minister Moses Nagamootoo participated in a ribbon-cutting ceremony for the Greater Muscatine Chamber of Commerce and Industry at Joseph Pack-N-Ship.

Tony Joseph has reportedly stated that he migrated from Guyana in the 1970s to the British Virgin Islands with his father to take up a teaching job there.  He learned the freight forwarding business in Canada and worked at a freight forwarding company in Chicago before returning to Muscatine where he set up his own shipping company.

He recalled having to leave Guyana in 1977 because of the political conditions then during the rule of the then People’s National Congress (PNC).  “When I was young in Guyana, there was an election, and the military collected the ballot boxes at gunpoint and kept the dictator in power. My dad decided it was time to get out. He had an opportunity in 1977 to teach in Tortola. In 1980, my mother had an opportunity to become a nanny in Philadelphia, and we immigrated to America. My parents knew a missionary pastor from Muscatine who invited us to Muscatine. He helped us find a place to stay and get our first car. Muscatine has been really good to my family. I have nothing negative about Muscatine.” he was quoted as saying in the Muscatine Journal.