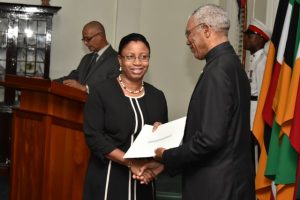 Justice Roxanne George, one of the three new female Senior Counsels, receiving her Commission of Appointment from President David Granger.

President David Granger has defended the appointment of a sitting High Court judge and a Retired Appeal Court Judge as Senior Counsel, saying that under normal circumstances they would have been appointed 20 years ago for their contributions to Guyana’s legal profession.

Since the list of appointees was announced on December 31, 2016, there have been some criticisms as a sitting judge was named. However, the Head of State noted that the 20 year absence of appointments means that a generation of qualified legal practitioners have missed out on receiving this honour. “For the first time in 20 years, I have appointed three women and I couldn’t find any reason why women weren’t appointed before and as far as sitting judges are concerned as in the case of Justice Roxanne George, she served for several years in the DPP [Director of Public Prosecutions] and were this a normal jurisdiction, during those years, she would have had the [Senior Counsel appointment] long ago. It is a travesty that for 50 years, we couldn’t find a woman attorney to grant the Senior Counsel to and she is fully qualified,” the President explained.

He added that Justice Claudette Singh too has served (and is still serving) in various capacities within the legal profession. She was Deputy Solicitor General, Puisne Judge and a Justice of Appeal and as Guyana Police Force’s Legal Advisor. President Granger said that in normal jurisdictions her experience and qualifications would have qualified her elevation to Senior Counsel.

Nine distinguished, long-serving legal practitioners were Wednesday presented with their commissions of 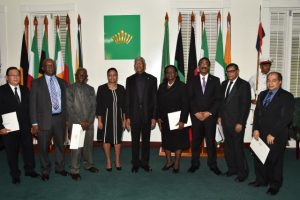 appointment and named Senior Counsels by President David Granger at a ceremony at State House. This is the first time in over 20 years that Senior Counsel have been appointed and the Head of State called an absence of such appointments a ‘dereliction of duty’.  Among those officially appointed today were  two of the first three women to to ever be elevated thus; Justice Roxane George-Wiltshire and Ms. Rosalie Robertson. Justice Claudette Singh will be presented with hers at a later date as she is currently overseas.Attorney General, Mr. Basil Williams, Mr. Neil Aubrey Boston, Mr. Charles Fung-A-Fat, Mr. Clifton Llewelyn John, Mr. Rafiq Khan and Mr. Vidyanand Persaud are the other legal practitioners to receive the honour.

The Head of State in his remarks said that the elevated status of Senior Counsel is not perfunctory or ornamental, but rather it is a symbol of nationhood that promotes a sense of national identity by defining who Guyanese are as a people and the values for which they stand. “It is a mark of respect, of recognition and of reward for the accomplishments of those who have given, and who continue to give, selfless service to our nation. Your average individual service is 37½ years and your accumulated service is 338 years. You embody a massive amount of legal education and experience. You are exemplars of a fine tradition of an honourable and ancient profession,” the President was quoted as saying in a statement issued by the Ministry of the Presidency.

He explained that the appointment of Senior Counsels, which was last done in 1996, constitutes an important institution of the State and is also an important part of his personal obligation as President of Guyana to ensure that deserving citizens are given their due.

“It is my obligation, not an option, to respect our national system of honours. Failure to confer these awards, whether as a result of caprice or malice, would constitute a dereliction of duty, the debasement our identity of nationhood and an affront to our citizens. I shall, with regularity and consistency, recognise and reward the work deserving citizens by conferring these honours on the basis of merit.  This is the custom of our people.  This is the convention of good government. This is the culture of a good society,” President Granger said.

President Granger reiterated that this elevation is a sacred symbol of nationhood, which reflects the country’s ambitions and aspirations to improve the quality of life, to be more fully integrated as a community of citizens with common ideals and to share a sense of national identity.

“Elevation to the status of Senior Counsel is a reflection of the respect and reverence of a grateful nation. We know that you have toiled over a long period of time.  We applaud your accomplishments. We appreciate the outstanding service that you have rendered.  We commend you for your commitment to the common good. The nation encourages you to continue, through precept and example, to serve your country and your profession. The nation is proud of you all. The nation celebrates your achievements, consecrates your sterling service and congratulates you,” the Head of State said.

For newly-minted Senior Counsel Neil Boston, this recognition was a long time coming. He explained that there was a Senior Counsel committee, which was eventually dissolved. However, a few years ago, eight names were proposed for consideration to the previous administration, but that too never came to fruition.

Justice George-Wiltshire said that she was invited to apply for the title of Senior Counsel since 2003, which she did but nothing came of it until now. Her advice to young, female attorneys is for them to be a lawyer’s lawyer, which means that while there may be a lot of hype in the gallery, they must not lose focus of important aspects of the profession such as scholarship, research, presentation to the court and their overall deportment.