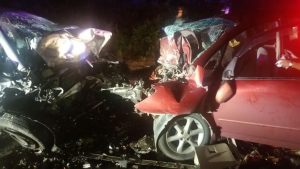 The two cars involved in the accident at the Seweyo turn, Linden Highway

Fire fighters, police and public-spirited citizens sawed and broke open the badly mangled vehicles at the Seweyo turn and removed the dead men.

Two of the deceased have been identified as Dave Primus, the driver of a red Spacio bearing license number HC 5326, and Dextroy Grrifith.

Griffith’s pregnant wife, Whitney Griffith, has been hospitalised with broken bones including her ribs.

The other car is a grey Spacio bearing license number PRR 7151.

The circumstances surrounding the incident were not immediately available.