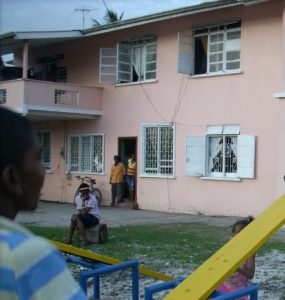 The 16-year old boy, who drove a car in the compound of a New Amsterdam orphanage where it slammed into a wall that crumbled and killed a nine-year old orphan, was Thursday charged with manslaughter.

Also an orphan at the Alpha Children’s Home, Gay Park, New Amsterdam; the fifth former at a school in the town was granted GYD$350,000 bail and ordered to return to court on February 17, 2017 by Magistrate Mauricia Mittelholzer.
The lad is accused of causing the death of Nina Blair.
He was represented by a lawyer who has been retained by the Ministry of Social Protection.
Police and officials of the Alpha Children’s Home have said the boy entered the car, which belongs to the institution, and was driving the vehicle when the mishap occurred on Christmas Eve afternoon.
He allegedly pressed the accelerator instead of the brakes, resulting in the vehicle smashing a stump wall that crumbled on Blair who was playing on a patio. Orphanage officials said the boy was not permitted to drive the car in which the ignition key had been stuck three days before.
She sustained severe head injuries and was transferred to the Georgetown Public Hospital Corporation where she died early Christmas morning without regaining consciousness.
Blair and her siblings were placed in the Alpha Children’s Home after they had been found on the seawall at Edinburgh Village, Berbice.
Their mother was subsequently convicted for child neglect.