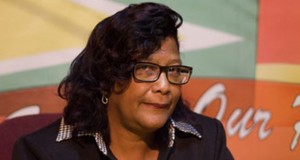 He said Harper was lately retained to provide her “rather unique skills” in areas of sovereignty and documentation, at a time when the ministry had been plagued by high staff  turnover and they are experiencing challenges in executing duties.

“In relation to matters to do with sovereignty, because of the delicacy of that area we have been utilizing the skills of Mrs. Harper to assist us in that areas and that is ongoing; it will continue,” said Greenidge.

Harper, a career diplomat, stepped down as Director General of the Ministry of Foreign Affairs early last year to be the running mate of then PPPC presidential candidate, Donald Ramotar.

After that party’s defeat, she has taken a back seat and has never been seen at the headquarters or events of that now opposition party.

Ambassador Harper was recently seen at the launching of the Afro-Guyanese business chamber named the African Business Roundtable.

Meanwhile, the Foreign Minister praised the PPPC for its unwavering support to the Guyana government in dealing with the country’s territorial integrity.