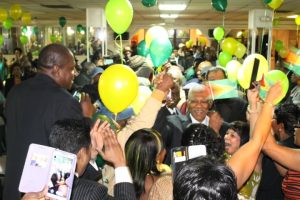 The Guyana government is yet to divide its duties to better serve the Diaspora, but at the same time the Foreign Ministry  should not be regarded as an employment bureau, Foreign Affairs Minister Carl Greenidge said Thursday.

Reacting to claims by the Diaspora that the Ministry of Foreign Affairs has failed to involve them in setting up businesses, run ministries and utility companies, he said his arm of the Guyana government is not an “employment exchange.”

“The Diaspora has a lot of contributions to make in terms of its skills, its knowledge but we are not as Ministry of Foreign Affairs mandated to be a recruitment agency for the people of the Diaspora of New York, for example, which is a lot of the complaints and things are arising,” he told a year-end news conference.

Greenidge, who was one of the front-line campaigners for the A Partnership for National Unity+ Alliance For Change (APNU+AFC) in the last election rubbished “outrageous” claims by the Diaspora that they are being “dissed” (shunned).

“All the ‘busing out’ that the Ministry of Foreign Affairs receives from those ill-informed persons- however well-intention is just that: ill-informed. We are not ignoring the Diaspora, we are not treating them as not important,”  Greenidge said.

His comments came against the background of concerns by several Guyanese groups and individuals mainly in New York that they have been treated as outcasts, not affording them jobs or involving them in decision-making.

The Foreign Minister said government was yet to streamline the roles of the dozen or more ministries in interfacing with the Diaspora as part of a large strategy that is being supported by the International Organisation of Migration (IOM). “The ministries have to persuade the Cabinet of their role in that Diaspora strategy, how they can be most effective and then the Cabinet has to decide on a division of labour. That has not yet been done,” he said.

The Diaspora Engagement Strategy is expected to identify the Diaspora’s needs, the best means of communicating with them and build on existing institutions.

President David Granger recently said he loves the Diaspora and he thanked them for his support in his election campaigns, but at the same time they should cease complaining and invest in villages. ” “When they want to send a petition next time, ask them to petition for a permit to open a factory or a farm. Tell them I say so,” Granger has said.

In response, the group of Guyanese organisations in Brooklyn and Queens have vowed to distance themselves from the coalition.