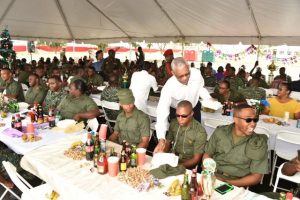 Commander in Chief of the Armed Forces, President David Granger serves lunch to some of the ranks, who are stationed at the Base Camp Ayanganna.

Several soldiers on Wednesday vocalized their disappointment because their Commander-in-Chief, President David Granger did not announce a tax-free one month bonus at the Guyana Defence Force’s (GDF) headquarters where he feted soldiers on the final leg of “Soldiers Day”.

Multiple sources confirmed that a number of soldiers let their feelings known while the President was arriving and after his address.

The soldiers appeared less than interested in the remarks by Chief-of-Staff, Brigadier George Lewis and were anxious to listen to their Commander-in-Chief.

When the President got up to address them, they greeted him jubilantly but when he was finished speaking and no one-month bonus was announced, a number of them were heard remarking, among other things, “that is all he come to talk” and “we ain’t even get nut’n.”

This is the second straight year that members of the Joint Services, including the GDF, have not received a month tax-free salary as a bonus but instead received a one-off GYD$50,000 last in 2015 and GYD$25,000 this year.

When contacted, the Chief-of-Staff said he did not hear anyone boo. “I can’t punish anybody for something, as far I know, did not occur,” he told Demerara Waves Online News.

Senior officers have told Demerara Waves Online News on condition of anonymity that they once looked forward to the one-month salary as a bonus to assist with Christmas expenses.

Citing economic sluggishness, due largely to a downturn in most sectors , government this year scraped the  National Treasury to pay a 1 to 10 percent wage and salary increase to the majority of government employees, with the lowest paid receiving 10 percent.

2016-12-22
Denis Chabrol
Previous: ‘Guyana is prepared to prove its case in Court’ -President Granger on decision by Secretary-General Ban Ki-moon on border controversy
Next: Fire fighters fend off bandits at Diamond Station