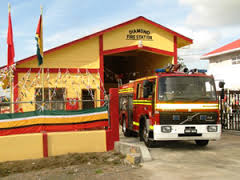 One of three men, who attempted to commit a robbery at the Diamond Fire Station, East Bank Demerara was Thursday caught and handed over to the police, renewing concerns about fire fighters’ safety at that location.

Assistant Police Commissioner, Clifton Hicken told Demerara Waves Online News that the man, who was caught, was the driver of a car in which the bandits arrived.

The car has been also held by police, and investigators would be tracing in whose name that vehicle was registered.

The Divisional Police Commander said two firemen dressed in plainclothes were about to open the gate when the bandits attempted to enter the premises.

However, the robbers faced resistance and were chased by the firemen who caught one of them and summoned the police.

“The only time you are life at risk is when you go to out a fire but it is not nice to know that you are at the (fire) station and your life is at risk also,”  a source told Demerara Waves Online News.