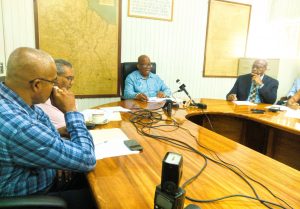 The $500M allocated for Homestretch Development Inc in budget 2017 to pay off its $798M debt to contractors for the D’Urban Park Development Project is all government will be providing, said Finance Minister Winston Jordan.

“I think the money that is owed (by HDI- the company which built the D’Urban Park) is roughly $798M,” Jordan confirmed to a news conference this morning at the Finance Ministry’s boardroom.

“The government indicated that it can only accomodate $500M as a full and final settlement, so what that means is that HDI would have to make some apportionment relative to the debts owed,” the Finance Minister continued.

Public Infrastructure Minister David Patterson told the National Assembly in the Committee of Supply recently that HDI had met with the Finance Ministry days before the 2017 budget, and it was agreed that some $500M, which will be transferred directly to the company, will be allocated to pay off the company’s debts to creditors.

“This is a take it or leave it situation,” Jordan told the press corps, “If you were owed $2M by HDI, if they say that you could only get $1.2M, then you could either accept the $1.2M as a full and final settlement or you could sue HDI… for the amount that is owing to you.”

When asked how suing the company would work out since government has declared special interest in the company, even placing Education Minister Dr Rupert Roopnaraine on the company’s board, Minister Jordan dodged the question saying he could only answer questions relating to the debt total for HDI and how much was provided.

“I don’t want to answer any more questions on this,” Minister Jordan said shutting down further questioning on the controversial D’Urban Park matter.

The D’Urban Park stadium, which was the main venue for Guyana’s 50th Independence celebrations, has been shrouded in secrecy since its inception after the David Granger administration entered office in 2015.

It wasn’t until January 2016 that HDI, a company set up with the government’s blessing, was registered with Education Minister Dr Rupert Roopnaraine named one of the company’s Board Directors considering Government’s special interest in the project.

A parliamentary motion last November brought by Opposition MP Juan Edghill in the National Assembly sparked an intense debate on the need for government to release the names of the financiers and other financial arrangements for D’Urban Park.

During that November debate, which saw a packed list of some 21 speakers, Public Infrastructure Minister David Patterson stood in the House to finally name the directors of HDI’s Board, including Lawrence ‘Larry’ London who heads the Board.

Minister Patterson did not name his Cabinet colleague, Dr Rupert Roopnaraine, whose name was only released after the opposition PPP sourced the company’s registration document and released same to the public.

Patterson’s ministry had taken over the project in April 2016 investing hundreds of millions after it was found that HDI did not have the resources to complete the work in time for Guyana’s May 26 celebrations, and substandard work had been done at the site.