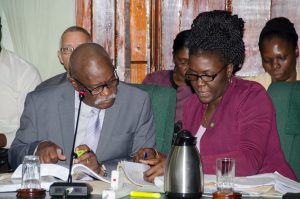 Citizenship Minister Winston Felix with Acting Permanent Secretary at the Ministry of the Presidency, Abena Moore

The Citizenship Ministry, according to subject minister Winston Felix, is currently engaged in a computerisation of national birth certificates.

Minister Felix told the Committee of Supply of the National Assembly today that out of $194M budgeted for the computerisation project, some $3M has been spent on computerising years 1987-1997.

Meanwhile, the remaining $191M will be used for the computerisation of birth certificates from years 1886-1986.

There was come confusion in the House since it was indicated in the budget estimates that $191M had been spent, as was raised by Opposition MP Juan Edghill.

Clarifying the mistake, Citizenship Minister Felix said the remaining $191M will be returned to the Consolidated Fund, as required by law, before the end of the December 2016. He said too that the $191M was budgeted for the project in 2017.

It is believed that some 3.5 million records are to be computerised under the project, however, Minister Felix could not say how many documents were already computerised since progress was only being measured by years and not by the number of birth certificates done.

Felix added that part of the reason why contracts for the 1886-1986 period were not awarded was because the “bidding process did not turn out suitable contractors… [as such] the money is still with us. We will now utilise it internally to proceed with this project.”