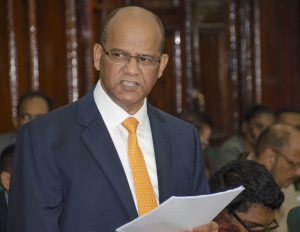 With the perception of crime still high in Guyana, Opposition MP and former security minister, Clement Rohee, has called for Public Security Minister Khemraj Ramjattan to declare to the people whether he has lost the war on crime.

“Can the Guyana Police Force deliver,” Rohee questioned during his budget debate, “how much can they deliver when fighting and backstabbing is taking place amongst themselves.”

Rohee asked how the police force could guarantee order in society when “they don’t have order in their own house.” The Opposition MP said the infighting has sent signals to the criminal underworld.

“Criminals seem to have better intelligence than the law enforcement. They seem to know where the money is, where it is coming from, which bank, and where it is going,” Rohee continued.

“From all indications,” the MP continued, “it seems it pays to commit crimes in Guyana. Criminals are becoming bold and brazen every day because of signals coming from the top.”

“There must be constant examination of the use of force in the present-day context,” Rohee observed in his comment on the police force. “There must be a strike in balance between law enforcement and the rights of citizens.”

Rohee called for an independent survey on crime to complement the crime rate survey conducted by the Guyana Police Force.

Speaking directly to budget 2017, Rohee said the budget is built on a weak foundation, and as such, “the strategic measures to achieve this model will fail.”

Rohee went on to challenge government’s focus on oil and gas saying it “has gone down the same road which some oil-producing nations have gone down before depending on oil over agriculture saying it cannot develop aspirations as a nation.” Rohee linked this to what he called government’s attempt to place the sugar industry on the chopping block.