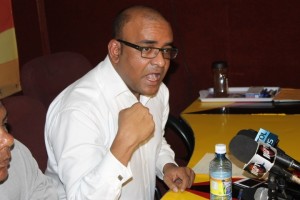 Opposition Leader, Bharrat Jagdeo on Friday said the failure of government to attract new investments was causing a shortage in United States dollars (US$) instead of a buying of that currency by Barbadians and Trinidad and Tobago nationals to satisfy their countries’ demand for foreign exchange.

He warned that government’s failure to attract Foreign Direct Investments, down to a mere projected 8.5 percent in 2017 would result in a further decline in the value of the Guyana dollar against other major currencies.

The Opposition Leader, who is a former Finance Minister and President of Guyana, said figures in the 2017 Budget show that investments in Guyana are increasingly being financed from domestic savings instead of foreign inflows.

This is what is going to put the pressure on the exchange rate  in the future Balance of Payments, not couple Trinidadians buying US$5 million here in the market,” he told the House in wrapping up his People’s Progressive Party Civic’s contribution to the 2017 National Budget Debate.

The Bank of Guyana on Thursday announced that it has suspended the purchase of Barbados, and Trinidad and Tobago dollars from cambios in a bid to ease the demand for US dollars.  Demerara Waves Online News was told that nationals from those countries have been selling their currencies in exchange for Guyana dollars which they then used to buy American dollars.

Jagdeo’s announcement at the end of his two-hour long presentation that he and other parliamentarians would be walking out of the House drew a sharp reaction from House Speaker, Dr. Barton Scotland. “I’m bound to remark that there is something missing when one side leaves during a debate. I believe that the first hour of the debate, it would be right to say those (government) chairs were filled.

What I am saying is that it serves no one; it serves neither the people of the country for whom we all profess concern nor does it serve the subject which is being considered,” said Scotland.

Looking at the figures in the estimates, he said Central Government’s Consolidated Fund has declined to negative GYD$ 60.6 billion in 2015 and it is projected to increase to GYD$123 billion in deficit in 2017. Heckling, Opposition Chief Whip, Gail Teixeira remarked “in nineteen months you have done this damage.”

The growth in Central Government credit would grow from Dec 2014 to Dec 2016 by over 30 percent, while credit to the private sector has grown to just over three percent. “The government is outstripping the private sector from borrowing from our banking system. It has run down all positive balances in the banks,” said the Russian-trained economist.

He warned the House that such a move of taking a bigger share of savings in the country to finance its deficit as “very, very dangerous.”