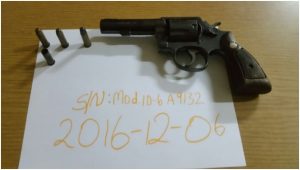 The gun and ammunition that were dropped by a suspected bandit during a confrontation with police at St. Phillips Church yard, Werk-en-Rust, Georgetown.

Police and a suspected bandit traded gunshots in the yard of the St. Phillips Anglican Church, Werk-en-Rust, Georgetown, considered a major hot-spot for robberies.

There is no indication that the man was shot, but he police said he dropped a .38 revolver and three rounds before fleeing the scene.
The incident occurred at about 11 O’clock Tuesday night when members of a police foot patrol “were confronted by an identifiable male, who discharged his unlicensed firearm at them and escaped, dropping the weapon with ammunition in the process.”
The Guyana Police Force said the ranks were inside the four-entrance compound of the St. Phillips Anglican Church located at D’Urban and Smyth Streets, “where several persons using the entrances to gain access to adjoining streets, have been victims of robberies, in the past.”
There, police said, the suspect was approaching from an opposite direction when, on seeing the police whipped out a handgun and discharged a round at the ranks, who immediately returned fire.
The suspect dropped his unlicensed .38 Special Revolver with three live matching rounds and a spent shell, scaled the fence and escaped.
Parishioners at the St. Phillips Anglican Church were robbed less than five years ago during a Sunday church service.