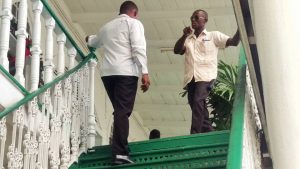 A city police officer points aggressively at the media after asking one Demwaves reporter, and another Guyana Chronicle reporter to leave.

The Media and members of the public were turned away from City Hall today by City Police who were given orders handed down by a majority of city councillors.

It was Councillor Oscar Clarke who moved a motion, during today’s extraordinary statutory meeting of the council, that the session discussing Georgetown’s 2017 budget, laws for the Parking Meter project, as well as laws for the proposed Container Fees, be kept in-camera.

Customarily, the media as well as the public were allowed to sit-in on budget meetings for the Georgetown City Council.

Councillor Clarke’s motion was seconded by Councillor Junior Garrett.  A Team Benschop Councillor exited the meeting and explained to Demerara Waves Online, while standing in City Hall’s compound, that 11 councillors voted in favour of keeping the session closed, 10 councillors voted against, and one councillor abstained.

Councillors Clarke and Garrett were among the delegation accompanying Mayor Patricia Chase Green to Mexico and Panama earlier this year. It was out of this trip that the parking meters project for Georgetown was born.

A project that continues to be rejected by citizens of Georgetown, including the Private Sector Commission. The Commission recently said out of $750M expected to be earned yearly from the parking meter project, Georgetown’s City Hall would only receive $100M.

The Georgetown municipality is also late on presenting its budget to the Communities Ministry. The city administration was expected to present the budget on November 15. This could not happen, however, because both Mayor Patricia Chase Green, and Town Clerk Royston King were out of the country.

The packed agenda today comes almost one week before the December 15 election for the City Council to elect a new Mayor and Deputy Mayor. Deputy Mayor Sherod Duncan is running for Mayor, presumably against incumbent Mayor Patricia Chase Green.