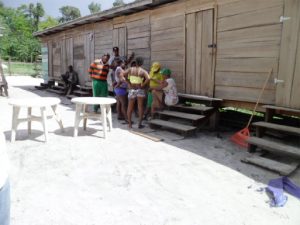 Some women of the 14 Miles back dam in discussion with GWMO President Simona Broomes in front of what is known as a ‘kaimoo,’ which is a crudely built structure with small rooms where women have sex with men for money. (Stabroek News photo and caption)

Government will be accommodating women working in the mining districts in hotels instead of the shanty structures known as ‘kaimoos’, Junior Minister of Natural Resources Simona Broomes announced on Wednesday.

“The word ‘kaimoo’ will be a word of the past. We inherited a government who had women in kaimoo. Let me put you on notice. We will have them in hotels,” she told the National Assembly during the 2017 National Budget debate.

Broomes is the founder of the Guyana Women Miners Organisation (GWMO) which has been at the forefront in the fight against trafficking of mainly girls and women.

Kaimoos- usually long range structures made from wood, zinc and sometimes tarpaulin- are more often used by commercial sex workers in mining areas to offer their services to miners.

Junior Natural Resources Minister was at the time reaction to heckling about the kaimoos by  People’s Progressive Party Civic (PPP) parliamentarian, Nigel Dharamlall.

Dharamlall later told Demerara Waves Online News that the “pleasure houses” should be dismantled as part of efforts to sanitize the mining sector. “It’s an area of concern if you want to build a cleaner mining sector and in the hinterland I think that is something that we need to address as an area of significant area of concern for Amerindians and all of us as politicians,” Dharamlall, a former Permanent Secretary of the Ministry of Amerindian Affairs, told Demerara Waves Online News.

He hoped that Broomes’ announcement that the kaimoos would be replaced with hotels was in jest and not a policy position of the government.